Valentine's Day with Acton and Lizbeth by Rebecca Royce 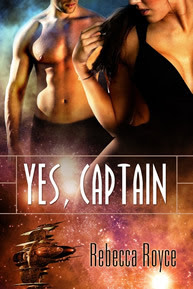 Lizbeth fiddled with the control panel in the Maintenance Room. It never seemed to work right and after their last encounter with the Lizard People, she wasn’t exactly certain that it ever would again. How many times could one section of the ship get blown up and rebuilt before it went permanently haywire?

“Should you be doing that?”

Lizbeth jumped, bumping her head against the panel and cursing. Damn, Acton. He always snuck up on her.

He shook his head, making a tut-tut sound before pulling her into his embrace. “This is why I asked if you should be doing that?”

She shoved at his chest. “Captain, I was doing just fine until you startled me, which I think you did on purpose.”

Lizbeth flipped him her middle finger, something she knew he understood since he’d taught it to her. It might be an earth specific gesture but the meaning seemed clear in any language.

“Now, don’t be like that.” He took her hand, kissing her knuckles gently. “I’m just worrying about you and the little one.” He rubbed her belly to stress what he made.

She bit down on her lip. She couldn’t be angry with him when he acted like that. Her current pregnant state had come about thanks to his teaching her about mistletoe around the human Christmas holiday.

“I made you something?”

He pulled a cut out red piece of paper shaped like a heart and handed it to her. She stared at the paper blankly. “You had the computer cut out a heart out of a piece of red paper for me?”

Acton rolled his eyes. “I didn’t use the computer. I did it myself and it’s for you because it’s Valentine’s Day.”

“I don’t know what that is. Is it another human thing?”

“It's the day that humans stop and take time to tell each other how much they love each other.”

Lizbeth scratched her head. Human traditions confused her. “Why do they only do that once a year?”

“They do it all the time but Valentine’s Day they remember to take the time.”

She held out the card. “By cutting out pieces of paper?”

“And giving each other flowers and chocolate.”

Now that was an idea she could get behind “Chocolate?”

His grin lit up the room as he passed her a box filled with her most favorite thing in the universe—chocolate. She grabbed the present greedily and held it to her chest. “I think you’re right. I absolutely should not be fixing the maintenance unit. I absolutely should be eating these instead.”

Do you want to see more of Acton and Lizbeth and how they ended up together gallivanting through space? Check out Yes, Captain.

And Happy Valentine’s Day to all of you! Enter to win a $10 Amazon Gift to one lucky commentator.

I do like the idea of explaining Valentine's day to an alien. I'm thinking now of how to explain the tooth fairy to an alien!!!

Oooh, I love it. Never thought of how to explain human traditions to those who wouldn't know.

Like Lizbeth I think Chocolate is my favorite part of valentine's day too!!
brandon_savannah@yahoo.com

How about any of our customs and how we would go about explaining things to an alien?

It does make one think to try to explain why we do what we do!

I think I like this Terran tradition of giving and receiving, especially the receiving part.
Thanks for coming today, Rebecca.

Chocolate! I knew I forgot something. Thanks Rebecca!

They make such a sweet couple.