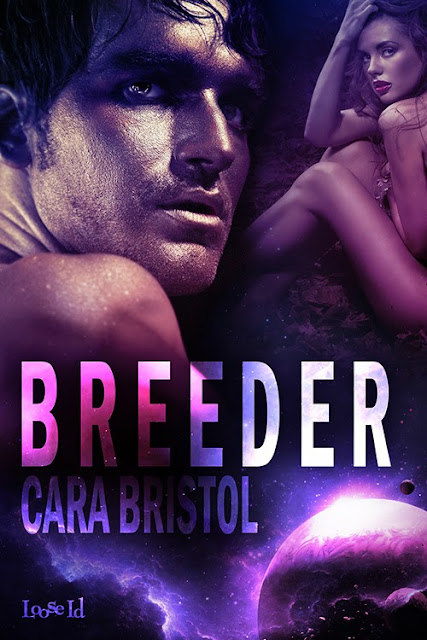 Top Ten Words of an alien vocabulary
By Cara Bristol

Sudon – A paddle made from the tail of the Baronian Ilyx. Although the quills are removed, protrusions in the stiff leather remain and retain trace amounts of venom. A padding with a sudon creates fierce stinging.

Protocol – A compilation of law and culture, the ultimate authority. Protocol divides the race into castes, and deems females as inferior, unworthy beings. Protocol makes loving a breeder illegal.

Drakor – Literally a carrion-eating rodent, but to call someone a drakor is the vilest insult. Drakor is most often used to describe social deviants.

Alpha – An alpha (lower case) is a male who tested and deemed by Protocol to be physically fit, strong, aggressive and dominant. By virtue of their superior genetics, only alphas are permitted to reproduce. An Alpha (uppercase) denotes one of only five ruling Commanders of planet Parseon.

Beta – A male of secondary status. Betas have been tested and deemed by Protocol to lack aggression and dominance, so they fulfill the support functions of Parseon society and serve as domestic partners to alphas. It’s been said that betas can be exceptionally cruel.

Breeder – Female. The most inferior, substandard members of society. Their primary function is to serve as reproductive incubators for alphas. Their secondary function is an ancillary sexual outlet for betas. Few alphas would lower themselves to engage in intercourse with a breeder—except for mating or to take possession of another alphas property.

Bridge of Amity – A formal ritualized gesture/position ostensibly used to demonstrate friendship. In reality, the first one to initiate a bridge of amity in effect neutralizes an enemy’s defenses.

Enclave – a settlement of drakor. A group of males who have accepted females as their betas.
There’s a word that’s not on this list because it doesn’t exist in the Parseon language….love.

To secure his legacy, Commander Dak, a ruling Alpha of planet Parseon, purchases Omra, a breeder slave. He intends to impregnate her, produce a son, and hand her off to his anointed beta partner. As Dak and Omra discover a sexual bliss banned by law, he begins to question the traditions and ways of his people, causing him to jeopardize his command and endanger the life of the woman he has come to love.

Breeder explores the concepts of gender roles and social prohibitions against deviant behavior. It includes graphic M/F and some M/M sexual content and violence, including nonconsensual domestic discipline. 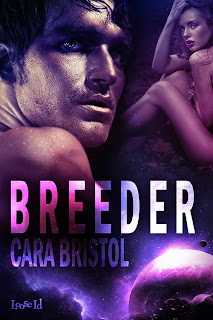 If not for the sneeze, Dak would have exited the musty, dank corridor. But the muffled sound caught his attention. When he squinted into the darkened cell, he spotted a female crouched on a straw mat in the corner. He hadn’t noticed her on his way into the Breeder Containment Facility; the habitation unit had appeared empty.

Dak turned to the BCF director and sighed. “What about her?”

The beta’s already crooked mouth drooped farther in distaste. “My apologies, Commander. You don’t want that one.”

Sival’s disparagement piqued Dak’s interest. The director’s opinion had proven worthless; none of the breeders he’d preselected for inspection had rated close to satisfactory.

“Very well, Commander.” Sival saluted and opened the habitation cell with a master entry card. Dak stepped into the small enclosure. The director followed, and the metal gate clanked shut.

The naked female drew into a tighter ball and tucked her face deeper into the crook of her arm. Other breeders had preened as soon as they’d noticed him and his chest-insignia identification. He wasn’t just an alpha. He was the Alpha.

This breeder’s lack of respect and failure to adhere to Protocol by acknowledging his presence struck him as odd. Dak frowned. “Is she mentally deficient?”

Sival tightened his lips. “No, stubborn, ill behaved. She would not befit an Alpha Commander.” He nudged the female’s hip with the toe of his boot. “Rise to your feet.” She did not respond, and he moved to prod her again. Dak forestalled him with a wave and grasped the female’s arm.

“You will stand.” He hauled her upright. She averted her face, so he grabbed her chin and forced her to look at him. Tangled hair the color of black heating stones fell back from an oval face to reveal eyes like the Parseon moon. The glimmer of intelligence that sparked within the violet depths aroused his interest more than anything else he’d seen so far. Nature had bestowed the Parseon people with an exceptionally strong immune system so that they rarely required medical intervention, but breeders by nature were weak, and so many of the ones he’d seen had seemed dull or ill or both. This one’s skin, when unsmudged by grime and dirt, probably glowed like the pale sands of the Ospian Sea. He supposed, as breeders went, she wasn’t unattractive, although the stench emanating from her was. His beta would throw a fit if he dragged such a creature into their domicile.

“She refuses to bathe.”

As Dak scrutinized her facial features for shape and symmetry, he noted little imperfection or dysgenics other than her lack of hygiene and her gender. When cleaned up, she would please the eye, but to bear his sons, it mattered more that she be healthy and strong.

He released her face, stepped back, and assessed her from head to toe. He exceeded the height of most males, alphas included, while she stood smaller than the average female. The top of her head failed to even meet his shoulder. She was thinner than other breeders too, although her chest bore an abundance of fatty breast tissue. In the chill of the cell, her nipples had puckered to hard points. Despite the coolness, he was experiencing a rise in temperature. A dormant lust chose that moment to kindle, causing heat to coil in his abdomen and groin. He could not remember the last time he’d experienced such a spontaneous reaction—if he ever had. With the pads of his fingers, he probed the sides of her neck for swollen areas. The way she trembled under his touch aroused a sliver of sympathy. Breeders lacked courage, and uncertainty frightened them. Not all alphas and their betas treated breeders well. If he chose her, she would be adequately fed and housed. His command consumed his time and energy, which left his beta alone for long stretches. A breeder would relieve Corren of household chores and provide him with a physical outlet as well.

“What is she called?” Dak asked.

“Her sire named her Omra.”

He parted Omra’s lips with his fingers and slipped a digit into her mouth, running it along her upper gum line to check the solidness of her teeth. At a flash in her eyes, he jerked his hand away a centisecond before she snapped her jaws together, so that her incisor only grazed the tip of his finger.

Sival’s face reddened. “Commander, I apologize. I will have her flogged.”

“Unnecessary. I will take care of it.” He unclipped the sudon from his belt.

You can find CARA BRISTOL here:

Thanks for having me today!

Too many typos in my last comment. I'll try again.

You are determined to make me buy this book, aren't you? That was one incredible excerpt! I appreciated the dictionary too.
I'd already forgotten what a Sudan was and was able to go back up and get the definition.

You know, I'm supposed to be able resist buying a book 6 times . This is only TWO! You are cheating.

Resistance is futile, as the Borg would say. LOL. Thank you for your interest.

My pleasure, Cara! Always happy to have you! :)

Thanks for the breakdown. I just picked up my copy yesterday! Can't wait ti read it.