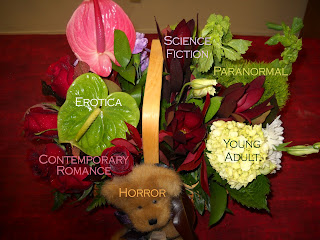 “Hi. My name is Flowers Suck (FS). I’m an overworked florist who teleported from the year 2222 to witness the launch of the revamped Backward Momentum blog into a haven for lovers of Science Fiction Romance. I come bearing gifts (a lame basket of flowers) and hoping to crash this party.”

FS drew in a deep breath of dead flower scent. “Red roses, a traditional (boring), and established symbol (archaic) of love (no imagination) has a tried and true pattern of boy/girl meets girl/boy, screws up, re-finds their love and rides either on horseback, driving Volkswagen bug, skipping hand in hand (all too lame to have a spaceship) off into the sunset (clichéd).

“Young Adult by itself is pure and innocent (yep, boring). But add in determined lovers filled with angst, the bittersweet becomes emotional and page turning fun. Paranormal without romance means the green Trix flower (dianthus or carnation family, relatively new to the flower scene and very cool) is just another Dr. Seuss type script of weirdness, but throw in lust and love, the vamp, were, shape shifter is someone who the reader can fall in love with.”

“As to Horror, trust me! clowns are about as frightening as Casper the ghost, while (shudder) Teddy bears can be downright evil. They’ll chop of the head of a hero in a blink of its beady black eye.” 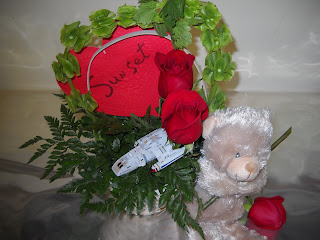 I really hate VD day. FS scowls at the humongous pile of thorns and foliage leaves at her feet. The last thing she wanted to do was blither on about romance when she had eight billion lovely (barf) roses to process, but she’d made a commitment to say something, no matter how trite, in honor of this really (I’m serious) awesome event.

“In conclusion, I know for fact (from the future, remember?) the three SFR writers who’ll run this blog will not only repeatedly make the bestseller list, they’ll also elevate the standards of the romance genre to make science fiction rule !! (throws confetti and bonbons everywhere) over any other.

“Kay, enough blither. Where the hell is the tequila? I’d rather drink the sunrise than shuttle into it. BTW, check it out. Arlene’s gifting a print or e copy of a paranormal romance novel called Ashes, and an e-copy of Splintered Energy, book one in a series of four. Splintered Energy is sci-fi romance. The lucky (ha ha) winner could decide for themselves if science rules over paranormal. Thank you, so much, Dawn, Jessica, and Graylin for hosting me! Bye.” FS races off in search of alcohol.
Posted by Jessica E. Subject at 10:15 AM

Oh now you tease, Arlene. I know how much you adore Valentine's Day - all that business coming your way, customers with smiles on their faces, never a nasty word thrown your way, no complaints you haven't got what they want - I bet you wish every day of the year was like this!
NOT

Welcome, Arlene. Great to have you here, knowing how crazy V-Day is for you.

LOL Arlene--er, I mean FS from the year 2222. Very fun post! I may never look at another rose without smiling to myself.

I admit, I buy roses. But the look in Lindsay's eyes when I give them to her is worth it. Thanks for coming to the party!

My mum was a florist, and by the end of the day she would hate roses and swear never to sell them again. But she always did.

Sit down and have a beer with me when you're all done, sweetheart.
The day is almost over. Your like cupid, with floral tape, vases and flowers.

Flowers? What are those?

Sorry it's such a busy day. But it makes the time go faster, doesn't it?

BTW, Arlene, I forgot to ask. Did you make up those special arrangements (pictured) just for us? How artistic!

hello!! Very interesting discussion glad that I came across such informative post. Keep up the good work friend. Glad to be part of your net community.