First of all, I want to thank everyone who participated in, and visited during Backward Momentum's 1st Annual Valentine's Bash. It was a blast!

Now, I recently finished off two blog tours and two blog hops. The one thing I noticed is that to many readers, science fiction romance is still foreign territory. And I just happen to be on a SFR reading binge--in between edits, that is. So, for the next couple weeks (maybe longer), I thought I'd share some of the recent science fiction romance books that I've read and loved. Here are the first two: 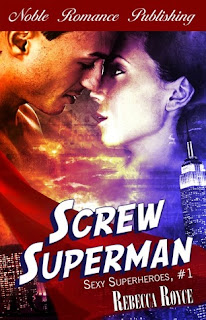 Wendy Warner is a bit of an oddball. Raised in an orphanage, she has found solace and friendship by watching the television show Space Adventures and participating in fan clubs related to the show. Every month, on the second and third Fridays Wendy comes to work dressed in a costume from the show that she wears to charity events. This has earned her the disdain of many of her coworkers but not from her boss, the president of the company, Draco Powers who rather likes the way the uniform tugs at all of her curves in the just the right places.

Draco Powers is a real life Superhero who told the world that, yes, Superheroes do exist, but, no, we won’t work for free or without health insurance. Some people refer to him with derision as the ‘Capitalist Superman.’ Draco is being hunted by an organization called the Organization, whose motives are unclear and yet still cause death and destruction wherever they go.

The Organization has decided that Draco’s biggest weakness is the way he cares about his employees and has picked Wendy out as their next target. To save her, Draco will have to come to terms with his real feelings for Wendy and why it is that he has so long resisted complicated relationships. That is, if he can get there in time…


Draco Powers is superhero, but one who charges for his services and provides health care to other superheroes in his employ. Wendy Warner is his handler, but she can't help but see him as more than her boss.

When Draco's company, Powers Inc. is threatened by The Organization, and he and Wendy find their lives on the line, will it push them closer, into something more intimate, or keep Draco from getting close to anyone?

This is a wonderful superhero story. While Draco is a larger-than-life character, Wendy is realistic and relateable, the perfect person to balance him. I enjoyed getting to know them as well as many of the minor characters.

The storyline is common to what I expect a superhero story to embody, but with twists and turns I didn't see coming.

If you're a fan of Superman, Batman, Spiderman, or any of the other good-willed men with secret identities, you'll enjoy this twist on their stories. I look forward to reading the next in the series.


This is the fourth book in the series, and they're still rockin'. 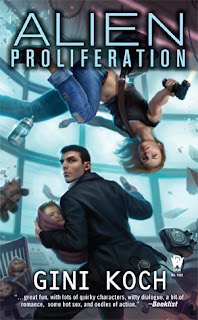 Alien Super-Being Exterminator Kitty Katt is expecting her first baby. But the alien attacks are getting more dangerous, and now Kitty and her Alpha Centaurion husband, Jeff, have to find out who's behind the conspiracy to kill Kitty's secret agent mom and what caused Kitty's transformation into a superhuman-and they've got to do it all before the baby shower...


Wow, I don't think I've ever had any book bring tears to my eyes as often as this book. It seemed to go back and forth from kick-butt action to extreme emotion. I've been Team Martini for all of the other books in the series, but this book not only made me love them even more, but the rest of the gang as well.

What I enjoyed the most though, was how much these characters grew, not only in this story, but the rest of the series as well. Unlike other series I've read, where the main character goes through the same experiences book after book, Kitty is allowed to grow up, to experience life, on top of saving the universe. Ms. Koch is not afraid to change the formula of each book, to throw new situations at her characters, and I appreciate that.

I highly recommend this book as well as the rest of the series, and can't wait for Alien Diplomacy to release this spring.

And next week, I'll have two more; a young adult novel, and a hot menage.


Have any recommendations of your own? Leave them here. :)
Posted by Jessica E. Subject at 6:00 AM

Thanks so much for the review of Screwing the Superhero