Passion: Emotion with High Stakes by Laurie A. Green

Valentine's Day usually brings to mind the softer side of love—fragrant flowers, delectable candy, soft music, a candlelit dinner and the liquid bouquet of a fine wine. Touching, tender moments spent with someone you love. 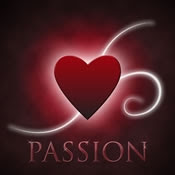 But love also has a more unruly and tumultuous side.
Passion.

According to Wikipedia, passion is from the Ancient Greek verb πάσχω (paskho) meaning to suffer)…a term applied to a very strong feeling about a person or thing. Passion is an intense emotion compelling feeling, enthusiasm, or desire for something.”What defines passion?

Passion isn’t necessarily confined to the realm of romance. The ancient Greeks saw love and war as virtually the same thing, two pursuits driven by the same emotion. In their mythology, Aphrodite, the goddess of love, and Ares, the god of war, were usually paired. Hand-in-hand they were the hallmarks of Passion.

In Science Fiction Romance, love is the tie that binds, but passion can compel a character to do surprising things. To act in a way that defies everything they believe in, to take enormous risks, and put their lives and everything they hold dear on the line. Indeed, passion can “launch a thousand ships.” 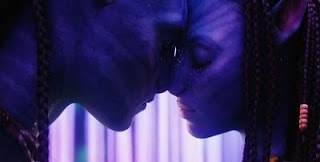 In the motion picture Avatar, Jake becomes torn between two worlds when he mentally "drives" an avatar with alien-human and immerses himself in the environment of the sentient moon, Pandora, and its Na'vi people. His tutor and guide, the female alien Neytiri, is at first disgusted by Jake's blundering attempts to learn about her world, which does not compute to the former Marine. In her words, Jake cannot learn because he cannot “see.” Even as he begins to understand and form a deep bond with Neytiri in his Avatar form, his human alter ego is supplying information to a military commander who's twitching for a chance to unleash superior military might on the natives. When Jake is forced to choose between two worlds, it’s passion that drives him to take an insane leap (literally) and win back the respect of Neytiri and her Omaticaya clan, earning a place as their new leader. In doing so, Jake not only puts his life on the line, but his human existence. Love and war again intertwined in a dynamic story of risk and emotion.

Exploring passion in SFR gives readers a stake in the plight of the characters and their futures. Understanding what drives a character to react or rebel brings them to life. What better way to understand their core strengths than by sharing the journey toward overcoming their weaknesses. By mentally joining with them as they gamble their very lives or the existence of everything they believe in.

As a reader, give me a tale that takes a character right over an emotional cliff—and then brings them back again—and you’ll have a fan for life. A story that fails to deliver on passion never lives up to its full potential.
Maybe Joss Whedon, the creator of Firefly, said it best: “Passion, it lies in all of us, sleeping…waiting…and though unwanted…unbidden…it will stir…open its jaws and howl. It speaks to us…guides us…passion rules us all, and we obey…Passion is the source of our finest moments. The joy of love…the clarity of hatred…and the ecstasy of grief. It hurts sometimes more than we can bear. If we could live without passion maybe we’d know some kind of peace…but we would be hollow…Empty rooms shuttered and dank. Without passion we’d be truly dead.”

And so would our stories.

Laurie A. Green writes award-winning Science Fiction Romance and blogs at Spacefreighters Lounge. She is best known as the founder of the SFR Brigade community of writers and fans. Always fascinated by stories of romance in the final frontier, she began seriously penning SFRs in 2007. Her first two novels were finalists in the 2011 RWA Golden Heart® Awards and have won numerous writing competitions across the .

For the Love, Lasers and Light Swords Valentine’s Bash, Laurie is offering a chance to win a full length SFR novel that sizzles—Barbara Elsborg's IN THE —the story of a heroine from Earth swept away by Three, a lusty alien hunk from the stars. But Three's passion-driven impulse spells doom. If discovered on his mothership, Lucy will be guaranteed a one-way trip into space without a spacesuit. If you are over the age of 18, enter a comment below for a chance to win. Be sure to include a contact email address. (Choice of print or digital copy for addressees inside continental US, digital e-book outside US, or an Amazon e-Gift Certificate).

Be sure to check out previous posts from the Valentine's Day Bash for more chances to WIN!
Arlene Webb
Graylin Fox
Barbara Elsborg
Posted by Jessica E. Subject at 11:00 AM

That was fascinating, Laurie. Passion indeed - what is done in the name of love can be awe-inspiring and terrifying.But where would the world be without it?

I do enjoy a story more where the characters suffer for their love and make sacrifices.

@ Barbara: Where would we be, indeed! Love is always the best motivator, IMHO!

@Pippa: Oh, so do I. The higher the stakes the more satisfying the resolution! As long as it's a romance and not a tragedy, of course. :)

Love and passion is definitely a motivator for me. Thanks Laurie!

I love your post, Laurie. Passion has to be on the front line in a good tale. Passion and love can be so intertwined that it is sometimes hard to separate the two.

I love stories with passionate characters, both outside and in the bed (or bunk!). When characters are passionate about something and really driven, that adds such an extra dimension to them. Of course, it's even better when they feel as passionate about each other as well.

@Bryce @Pauline Thanks so much.

@Kaye So true. It's when love and passion become tangled that the story really gets interesting, especially when the passion puts the couple at odds!

@Jan ...or rack (submariners' term--I use those a lot in SFR). I totally agree on the extra dimension passion can infuse into a story.

I love the way you take such a complex subject and strip it down to its most basic components. Passion is indeed what drives all really good stories. Great post!

@JC Thank you! It's a fun subject to explore, especially in relation to SFR.