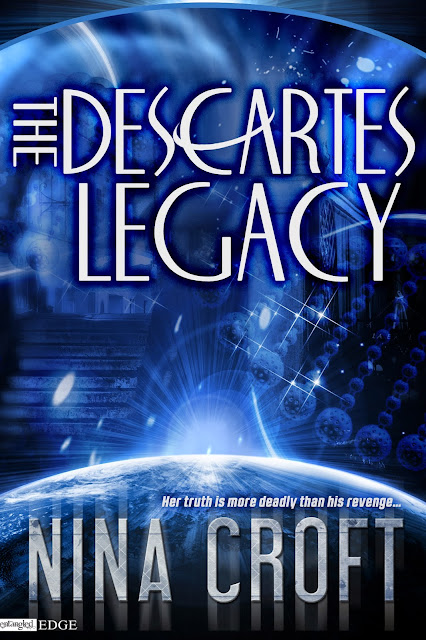 Lucas Grafton has spent the last ten years hunting the Conclave, a secret organization who took everything from him: his wife, his child, his very identity. Now he has a lead—an imminent terrorist attack on London—code-named Descartes.

Born with a genetic illness, Jenna Young has always known she was different. But the unexpected death of her father catapults her into a world of murder and terrorism she never expected. In order to stay alive, she must solve a twenty-five year old mystery—and her only ally a hard bitter man in search or retribution, her only clue the Descartes Highlands, an area on the near side of the moon.

Luke’s need for revenge collides with Jenna’s hunt for the past, and together they must stand against the Conclave. All the while uncovering the truth behind Jenna’s illness, a truth that will make Jenna question her very humanity.

When she pulled herself up, the room whirled around her. Somehow she managed to follow Luke out of the kitchen and down the hallway. Pushing open a door, he gestured to her to enter. “Try to sleep, and we’ll talk in the morning.”

Jenna swayed as she passed him. Putting her hand out for balance, she encountered the hard heat of his chest. Swearing softly, he closed his eyes for a second. Then he picked her up, carried her into the bedroom, and placed her gently down on the bed.

“Come on, Jenna, just a few more minutes and you can sleep.”

“I’m fine, really I am. Just everything keeps spinning.”

He straightened. Was he leaving? She didn’t want to be alone, and she had to swallow the urge to ask him to stay. Instead, he disappeared through another door and came back seconds later carrying a black toweling robe and a washcloth. He crouched in front of her, and gently wiped her face with the damp cloth.

Jenna closed her eyes and gave herself up to his touch. She was floating, suspended in time, only aware of his closeness, his hands gentle as he stripped her clothes. Her body responded to his touch, a heavy warmth building inside her.

When she was naked, he wrapped the robe around her shoulders. “Sleep.”

Exhaustion rolled over her and she lay down on top of the blanket. She would rest a little while then get up and shower. Curling herself into a ball, her injured hand held against her chest, she was vaguely aware of Luke moving around the room, picking up her clothes. His presence reassured her, and she closed her eyes.

But behind her lids, she saw the blond man who had snapped her finger. He came toward her, his eyes mocking, and the same sense of helplessness washed over her.

That had been the worst thing, even worse than the pain. The feeling she had been powerless, that they could do what they liked to her, and she could do nothing to stop them.

Tears rolled down her cheek, soaking the pillow, but she couldn’t seem to stop. The mattress depressed as Luke sat down beside her. He didn’t speak, just leaned back against the wall and pulled her into his arms. He smelled of warm man, clean sweat spiked with some exotic after-shave. Sighing, she burrowed her face against his chest, and finally drifted into sleep to the throb of his heart.

At the end of The Descartes Legacy tour, Nina will give away $25 Gift Card.
Enter the rafflecopter draw below for your chance to WIN!
a Rafflecopter giveaway

Nina Croft grew up in the north of England. After training as an accountant, she spent four years working as a volunteer in Zambia which left her with a love of the sun and a dislike of 9-5 work. She then spent a number of years mixing travel (whenever possible) with work (whenever necessary) but has now settled down to a life of writing and picking almonds on a remote farm in the mountains of southern Spain. 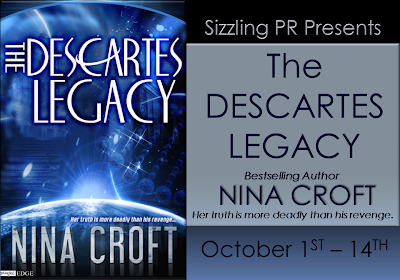 Awesome giveaway... thanks for the opportunity.

Thank you for visiting, Gayle! :)

Thanks for sharing the great excerpt and the giveaway. Sounds like a great book and I am looking forward to reading it. evamillien at gmail dot com

Glad you enjoyed the excerpt, Eva! Thank you! :)

Thanks for the excerpt. I am so excited to see such quality SFR as I have been finding lately. kathleenmcg6 (at) gmail (dot) com

Thanks for hosting me here, Jessica - much appreciated!

It's my pleasure to have you here, Nina! Please come back and visit again. :)

Thank you all for stopping by! <3