Eye F*cking and Other Non-Verbal Communication

It was an advanced cultural anthropology class on conformity and conflict revolving around sex. You know the kind—you read about all these mating rituals around the world then go and reenact them back in your dorm room with some guy who's joining the Peace Corps upon graduation.

Except in your lame imitation of a domestic Margaret Mead, you learn a little something along the way—like what's the difference between polygamy, polygyny, polyandry, and plural marriage or how gender roles form among the sexes or why most sex begins with non-verbal communication.

One of our required readings was an article from an old 1971 issue of Playboy Magazine titled "The Sounds of Silence," where Edward T. Hall and Mildred Reed Hall, a husband and wife research team—how cute is that!—wrote about the significance of non-verbal communication. They explained through examples how every subtle gesture and facial expression adds necessary depth to our verbal messages and how those gestures take on a different significance depending upon culture. 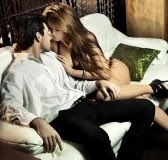 Among other things, they talk about how we use preening gestures to show interest in the opposite sex. For instance, a woman might smooth her hair, show her bare wrists or part of a thigh, while a man moves his gaze over the woman's body and face repeatedly--thus the title of my post!

In fact, the Halls detail in their article how we communicate three things with our eyes: dominance vs. submission, positive vs. negative, and involvement vs. detachment. Pretty straight forward stuff when you think about it.

When I created a culture for my books set in the Ambasadora-verse, I went back to the Halls' article and all the other readings from my anthro class. I knew I wanted a society in which plural marriage was the norm because it was the only way to replenish a decimated population traveling for generations on worldships. But some of these citizens would still yearn for the taboo of monogamy, for finding their one true love--even though the concept of love is relegated to nothing more than an emotional fallacy within their world.

In this kind of sexually charged culture, where there was a caste system in place, finding genetically superior mates (I call them amours) would become the most important thing, even among these sophisticated and technologically advanced humans. So I made them a very affectionate society where every gesture signifies something, whether it's a kiss to the forehead meant as an informal greeting or honing in on a potential amour's pupil dilation to gauge attraction. Deciphering the meaning of a touch becomes an art form and flirtation reaches the level of targeted precision.

Romance writers and readers have known for a long time just how important these silent signals are to relationships, especially when a couple first meets. The body language is just as important as the dialogue. That's why we embrace those gazes, those sultry looks, and those playful trailing of fingertips across skin--they're there for a reason!

GIVEAWAY: Tell us about a book you've read which really used body language to increase sexual tension between the characters and be entered to win a copy of one of my books, Greenshift or Ambasadora, or a bundle of both. Don't forget to leave your email address disguised something like this: heidirubymiller AT gmail. The three winners will be drawn randomly. Good luck!

Heidi Ruby Miller has been putting too much sex in her Science Fiction since 2005 because the relationship is as important as the adventure.

She loves high-heeled shoes, action movies, Chanel, intense music, and video games. And she has a column called Geek Girl Underground on IMJ.

Heidi is a member of The Authors Guild, Pennwriters, SFR Brigade, Broad Universe, and SFPA. Visit her at heididrubymiller.blogspot.com.

Fantastic, Heidi. Nothing wrong with high-heels and science fiction, especially when you put them together. Thanks for particpating in the party today.

I can't think of a book that I've read that has done the whole non-verbal thing. But your formalizing of the meaning of certain gestures, like a kiss to the forehead, reminds me of a Victorian book about the language of flowers and how each meant a different thing between lovers.

Well, it's not published yet, but Laurie Green's P2PC has a lot of communication of a non-verbal kind as well as verbal. Laurie is really good at letting her characters talk through their body language.

Very interesting Heidi. I think the concept in your SFR series is great.
Anthro is a great way to study how you want your SFR culture to be.

And yes, I see aspects of body language in many romance books. Too many to come up with just one now!

A most interesting take on society and marriage, Heidi. Wow. I'm guessing you've heard that old song about every little gesture has a meaning all its own? (grin)

Let's see, I really liked gesture communication in Linnea's Dock Five book Hope's Folly. A lot of the gestures involved guns and love of them, which made it fun.

I think Collision Course by Zoe Archer has some sizzlin' body talk. Whoa! :)

And of course, Lucy in the Sky, where a little body talk leads to the hero throwing the heroine over his shoulder and abducting her. Whew. Smokin'. Which is why I'm offering it for a random commenter here today.

@ Barbara. *blush* Thanks so much for your thoughts on P2PC.

Joan Swan's upcoming release FEVER has a number of examples of this--Joan and I took a class together from Margie Lawson on this very topic. It makes things feel so much more real if readers aren't hit over the head with them. :)

Now, if only a person's non-verbal cues matched their words. I'm so confused. Thanks for being a part of our bash, Heidi!

It sounds silly, because it wasn't at all romantic, but I remember one of the old Han Solo books by Brian Daley had a female character from a culture who primarily communicated kinetically. She was an excellent mimic. I was a tween when I first found this book and it made a profound impact on me as a writer. I've been fascinated with body language ever since.

Thanks for stopping by, everyone!