A Chemical Romance by Pippa Jay

Love is one of the most common themes in creative arts. It’s considered part of the survival instinct, a drive that helps keep human beings together to ensure the continuation of the species. Perhaps that’s why it’s such a common theme, particularly in science fiction, where threats to the species can be so much bigger and catastrophic on a galactic, or even universal scale.

But how would that work for a relationship between two different species, as can happen in a science fiction romance? Would a species that might be physically compatible respond in the same way to the pheromones released by a human? What if they had the opposite effect? And if love in a human is the drive to mate and perpetuate the species, how does that work with a biologically incompatible partner? Will we ever find out for real!?Most of us are aware that love is supposedly the result of a cocktail of different chemicals surging round our bodies. That initial dizziness we feel, the racing heart, the sweaty palms and hot flushes are all down to the release of dopamine, norepinephrine and phenylethylamine. The feeling of bliss comes from the “pleasure drug” dopamine. The racing heart and excitement are due to the adrenaline-like norepinephrine. Together they produce elation, intense energy, sleeplessness, loss of appetite: all the classic symptoms of being in love. When a couple has sex, oxytocin is released during orgasm and creates an emotional bond. The more sex, the greater the bond.

So far most of my involved couples have been human (or relatively so!). But romance in science fiction where one or both of the characters isn’t human is part of what gives sfr a greater scope to explore. To pursue a whole range of ‘what ifs’ beyond the simple ‘will they/won’t they?’ get together. That’s what I love about science fiction romance, where a happily ever after may not just depend on that first kiss.

To celebrate I’m offering a random commentator (please leave an e-mail address!) the choice of either a $10 Amazon Gift Card or a $15 Gift Certificate from my publisher Lyrical Press Inc. Enjoy! J 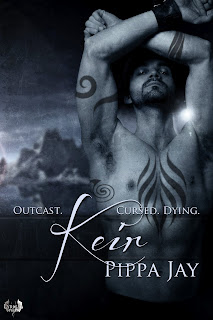 Outcast. Cursed. Dying. Is Keir beyond redemption?
For Keirlan de Corizi--the legendary 'Blue Demon' of Adalucien--death seems the only escape from a world where his discolored skin marks him as an oddity and condemns him to life as a pariah. But salvation comes in an unexpected guise: Tarquin Secker, a young woman who can travel the stars with a wave of her hand.
But Quin has secrets of her own. She's spent eternity searching through space and time with a strange band of companions at her back. Defying her friends' counsel, Quin risks her apparent immortality to save Keir. She offers him sanctuary and a new life on her home world, Lyagnius.
When Keir mistakenly unleashes his dormant alien powers and earns instant exile from Quin's home world, will she risk everything to stand by him again?

It is an interesting question--what if human pheromones were the equivalent of waving a red flag to an alien species...or firing a first shot across the bow? Talk about mixed signals!

That's a very good point, Pippa. If your species are humanoid, the body chemistry should be similar but you can open up a whole range of differences and play around with them. That's given me food for thought!!

I think it is so much fun to come up with alien lovers that are so very different. The "what if" can be so fascinating. That's what makes SFR the most intriguing genre!

What if takes on a whole new meaning in SFR, that's for sure! Good post!

*Cocks brow*
Now if you can just explain women, well be all set.

Thanks for coming to the bash, Pippa.

Excellent point. I hadn't thought about what human pheromones would do to an alien.

For me, everything is dependent upon that first touch, that first kiss. Thanks for participating!

I like the idea of being chemically or physiologically incompatible. It makes you wonder exactly *what* love is. Is love biochemical? Or is it something more ephemeral and indeterminate. Excellent questions! Great post!

Hmmmmm -- what a fascinating concept! Lots of room to imagine here. great post!