Now, I want you to know there are so many fabulous sci-fi romance stories out there. I'm only focusing on those I've read since the beginning of the year. I have so many more on my Kobo and bookshelves to read.

Anyway, here are two more that I recommend:

A Million Suns by Beth Revis

This is the second book in the Across the Universe series aimed at young adults. (I read many YA books.) 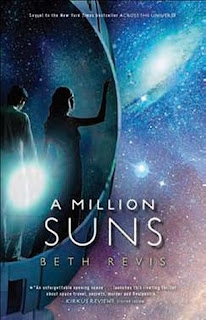 Godspeed was once fueled by lies. Now it is ruled by chaos. It’s been three months. In that time, Amy has learned to hide who she is. Elder is trying to be the leader he’s always wanted to be. But as the ship gets more and more out of control, only one thing is certain: They have to get off the ship.

While this story does not start out with the same intensity as Across the Universe, it makes up for it throughout the rest of the book. A Million Suns is filled with secrets, riots, chaos, murder, and more. A great page-turner, continuing to build on the relationship between Amy and Elder, and all of the obstacles they encounter. I highly recommend both books in this series, and look forward to reading the conclusion, Shades of Earth. January 2013 seems too far away.


Last Flight of the Ark by D.L. Jackson

There is not one story by D.L. Jackson that I haven't absolutely loved! She always manages to stir my emotions. 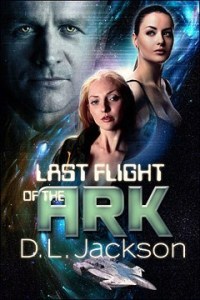 Twelve hours outside of Terra II, Colonel Kaleb Titan, a molecular geneticist and commander of the Ark, faces a life or death choice that could change the fate of mankind.

Colonel Kaleb Titan has spent the past eight months on a ship with two women. But he had always kept a professional distance from them. On the way to a new planet, Terra II to set up a new colony, they pass through gamma radiation which changes his resolve and the rest of their mission.

Last Flight of the Ark is a wonderful sci-fi menage romance filled with unexpected twists and turns and hot sex. It sucked me in and held on, stirring my emotions all the way to the last page.

So, once again, I ask you, what sci-fi romance books do you recommend? Recommend your own, if you like. :)

I don't read a lot of YA, but I've got Across the Universe/A Million Suns on my TBR pile.

Last Flight is as well. I hate not having the money to buy every book I want!

Oh, Misa, I completely understand. Right now, while I'm not buying as much, I'm trying to catch up on those I do have. :)

If any of the authors here have a sweet romance (G or PG rated, please), I'm happy to host you on my blog. I'm also happy to review your book if you'd like to send me a link or copy of it.

I'm still happy to host authors of steamier fare, but I do have to keep the blog at PG rating. I have a lot of teen readers.

I do not read a lot of Sci-fi, but I have to say I loved Beth's Across the Universe and am really looking forward to A Million Suns. She's is very adept at weaving mystery and creating twists into her work, and keep the reader hanging. :)