How many times have you read – her heart was breaking? Or—He broke her heart. Or she broke his heart. Don’t want to be sexist here. Doctors have identified a condition that mimics a heart attack, most often suffered by post-menopausal women who’ve lost a loved one. But any emotional trauma – grief, anger, anxiety—can trigger a massive surge of adrenaline that overwhelms the heart. It freezes the left ventricle, reducing its ability to contract and pump blood, and causes symptoms similar to an actual heart attack. It’s been called a concussion of the heart and it’s rare. Only 1-2% of people diagnosed with a heart problem have this, but it accounts for 6% of women’s heart attacks. The good news is lasting damage is rare and the heart recovers.


Bit of a morbid topic for Valentine’s Day, but I wanted to write about what a fantastic organ the heart is. It pumps (if you’re lucky) without problem for your entire life. Day after day, week after week, year after year. If only we could invent motors that worked for so long! So far 620 days is the longest anyone has survived with an artificial heart. While I can’t imagine an artificial brain being produced in my lifetime, I do believe that scientists will manage to build a long-lasting heart. Technology advances in leaps and bounds and is catching up with science fiction. Humans will have bodies that are built to last, skin that doesn’t age, muscles that never tire, and a heart that never wears out. When they fathom out a way to control adrenaline surges, then we won’t even have a concussion of the heart, but I suspect writers will still be using the expressions – he broke her heart. She broke his heart. 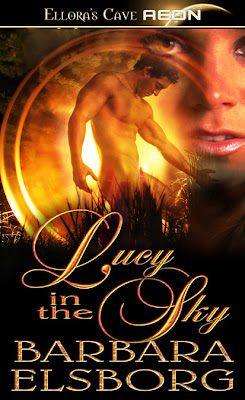 Don’t do that today. Today make someone’s heart sing by telling them you love them. Then remember to do that the day after and the day after that for as long as your heart keeps beating.
My heroine Lucy – in Lucy in the Sky thinks her heart’s about to stop when she’s whisked into space, but it turns out to be a journey to love. For one randomly picked commentator – I offer an ebook copy of Lucy in the Sky.


Be sure to check out previous posts from the Valentine's Day Bash for more chances to WIN!
Arlene Webb
Graylin Fox
Posted by Jessica E. Subject at 10:45 AM

Thanks Barbara! I hope I don't break anyone's heart today.

Sometimes when I'm having trouble with technology I can't imagine anything ever being built that will 'never' break.

Oh, such a heartfelt post, Barbara. Now I have the urge to run for my cell phone and send some Valentines texts to those I care about. (Valentines Day should be a national holiday, don't you think? I'd much rather tell them in person.)

Breaking hearts is such a time honored concept. True too it will be great when actual hearts can be fixed by replacement with an technologically advanced one-- as seen in Star Trek NG.

Lovely post, and an even lovelier title. Do I smell a Beatles fan here?

Thanks so much for coming to our bash, Barbara. Lucy in the Sky is a seriously great give-away.

One of my favorite of your stories.