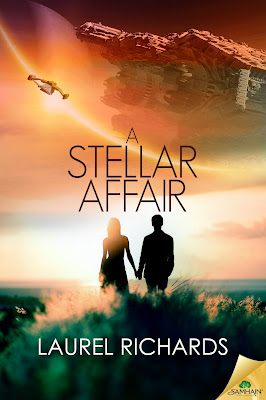 Whether you believe in psychic ability or not, you’ve probably seen on TV where the police occasionally consult a psychic on a case. Nothing the psychic “sees” is admissible in court, of course, but any evidence he or she leads the police to could help put the bad guy away. Well, what if psychic ability was really strong in some people, and those individuals were used for military purposes? What ethical dilemmas might arise out of that?

In A Stellar Affair, I have the hero, Jack, struggling with that very problem as he uses his psychic ability to extract valuable intelligence from the minds of the enemy. Jack wants to save lives, but his ability also makes him empathetic to the captives he interrogates. When he meets Ardra, he starts to feel like the two of them are no more than pawns in a war neither of them started. And while they’re supposed to be on opposite sides, the attraction between them grows into something far more powerful than hate.

A mind can be a powerful weapon, but the human heart can be even stronger. A Stellar Affair is a sweet/sensual romance that plays out the battle of the mind and the heart against the backdrop of interstellar conflict.

Blurb: Sometimes the heart leads and the mind must follow.


Ardra has no idea why she’s been abducted and thrown into a Roimiran interrogation room. She is simply a Tetch botanist on her way to a distant planet, not an enemy spy. She’s scared of the piercing eyes of the mind-reading precept assigned to uncover whatever secrets her mind might be holding. But even more worrying is the strange soul-deep connection between her and her captor.


Jackson Deimos excels at slipping in and out of someone’s memories to retrieve military intelligence deliberately hidden away—even from an unwitting carrier. But Ardra’s brain is a labyrinth of defenses he’s never encountered before. Plus, her beauty shouldn’t be this much of a distraction.


As their battle of wits and wills wears on, their emotions are the first to betray them. But if Jack can’t break through Ardra’s barriers, his superiors will turn her over to someone who will—by force. Leaving Jack having to choose between doing his duty or following his heart.

When Jack went to visit Ardra a couple of days later, she was even more obstinate than usual. He had given Nash the name Stevin to cross-reference, but he wanted to see if he could find out more from Ardra herself. Although she was still under medical supervision at the infirmary, she looked much better, and her powers of resistance had returned. He was having trouble keeping his focus.

“This would be a lot easier if you cooperated,” he told her.

She sat on the narrow bed with her back against the wall and her arms crossed.

“That wasn’t very nice,” he scolded her, but he had to repress a smirk. “All right. You win for now. If you don’t want to share anything with me today, I won’t push you. I just thought maybe you’d want to know why you woke up talking to Stevin.”

When she didn’t say anything else, he let it go. “Fine. Maybe you’ll want to talk about it later.” He glanced over his shoulder. “Why don’t we see about getting you checked out of here?”

“So I can race back to my comfy prison cell?” she asked.

“Are you unhappy with your room?”

She looked at him askance, but he could tell she wasn’t nearly as angry at him as she wanted him to believe. “Only with its function.”

He sat back. “You want your freedom?”

“Of course I want my freedom,” she snapped.

“And you think walking out of here will solve everything and give you that liberty?”

She stalled for a moment. “I certainly wouldn’t expect you to understand. You’re just after a damn number. You don’t care about me.”

Was she finally admitting she could have the information he wanted?

“I am after a number,” he told her honestly, “but I’m also trying to help you. You think you can ever be free with a Tetch download jackknifed in your skull? As long as you have that intel, you’re nothing but a puppet—a political pawn. You don’t even know who you are.” She looked hurt, so he softened his tone. “And I do care about you, probably more than I should.”

Her gaze collided with his, and he saw a feeling there that he couldn’t quite read. Hope? Affection? Before he could say anything else, he heard a loud call from outside.