All Too Human - Guest Post by S. Evan Townsend 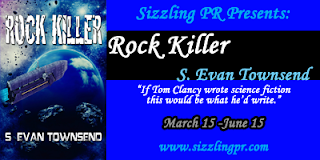 My latest novel, Rock Killer, is science fiction but there are no aliens in it.  That's because of when and where it's set (not too far in the future, and only in our solar system).  But also because I'm not very good at writing about aliens.  I admit this about my writing.  Last time I tried to do aliens they looked like cockroaches and had a matriarchal society (I made the males unintelligent).  But to me they just didn't ring true.

I read a lot of science fiction.  This means I read a lot about aliens.  And while most of the time the aliens are interesting and add something to the story, I have to suspend my disbelief because every alien I meet in science fiction is, in my opinion, too human.  Which makes sense because the writers are human, the readers are human, and it would be difficult for them to understand a totally alien species as it would be to understand the motivations of a slime mold.  But you have things like humans and aliens falling in love.  Which would be about as likely as an artichoke falling in love with a human.  The biology is just not there.  And even though I love Mr. Spock, two species that evolved on different planets mating and producing offspring is completely unlikely.  Again, you'd have more luck trying to mate a human and an artichoke.

This is partially why I don't buy the little green men and UFOs.  The aliens described by those who claim to have been abducted are too human.  Maybe by some evolutionary chance the basic humanoid form would be most efficient even for a species that evolved millions of light years away.  But evolution is random.  So you'd think any combination that could work would work.  Also (and this may be me projecting my human values on aliens), I doubt they would expend all the resources needed for interstellar travel to anally probe a few rednecks (are they that hard up for dates?).   But alien motivations should be completely alien to us.   It's possible that if we saw a real life alien, we might not even recognize it as such.  Arthur C. Clark said that any sufficiently advanced technology is indistinguishable from magic.   We might think aliens were wizards.  We might think they are ghosts.  Maybe they travel in the fifth dimension and we don't see them at all.

One thing I've often wondered about aliens (assuming they exist and this universe seems too big for them not to somewhere), is would they have the same values we'd have? For instance, would their laws of economics be the same.  Our economic laws are, after all, based on human behavior.  The law of supply and demand, for instance.  The more something costs, the less that people want it.  But maybe to an alien, the more something costs the more they want it.  Why not?  But then maybe because resources are finite (unless you invent something that makes them infinite), the law of supply and demand is universal.

If aliens do come for a visit (or we meet them in space) they are likely to be so much more advanced than us that we'd be like ants to them. It could be they have already been here, seen us, and decided we're not an ant pile worth stepping on.   They would probably be hundreds of thousands of years ahead of us, if not millions of years.  Why?  Because they couldn't be much behind us because they wouldn't be in space and the universe is billions of years old so odds are they started gaining intelligence millions of years ago rather than closer to when we did. That means if we meet the Klingons or the Kzin, and they are hostile, chances are, we'll lose.

I'll continue to read and watch science fiction and enjoy alien interactions.  But I will always think of aliens, such as Mr. Spock, the way Captain Kirk described him: "Human." 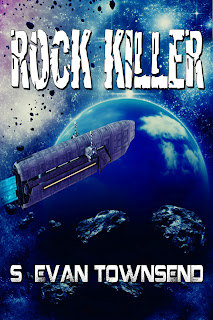 Space Resources, Inc. (SRI) mines asteroids for the riches a populated Earth needs without degrading the planet.  Yet there are those opposed to progress in whatever its form such as the Gaia Alliance, a front group for eco-terrorists.  During a violent attack on the Moon, the terrorists steal an exploration ship, arm it, and rename it the Rock Killer.

Charlene "Charlie" Jones of SRI security is trying to infiltrate the Gaia Alliance's cabal to find evidence linking them to the murder of her fiancé.  But a run-in with the law threatens to reveal her identity to the dangerous men of the Alliance.

Simultaneously, SRI Director Alexander Chun is traveling to the asteroid belt to bring a kilometer-long nickel-iron rock back to Earth orbit to mine for its valuable metals.  Following him and his multi-national team is the Rock Killer.  Without armaments, millions of miles from help, Chun must stop those who threaten him and the lives of his crew.

S. Evan Townsend is a writer living in central Washington State. After spending four years in the U.S. Army in the Military Intelligence branch, he returned to civilian life and college to earn a B.S. in Forest Resources from the University of Washington. In his spare time he enjoys reading, driving (sometimes on a racetrack), meeting people, and talking with friends. He is in a 12-step program for Starbucks addiction. Evan lives with his wife and two sons, aged 17 and 20, and has a 22-year old son attending the University of Washington in biology. He enjoys science fiction, fantasy, history, politics, cars, and travel.

DeWite moved into the observation room and Prince followed.

The room looked almost exactly like a bar since it was a VIP lounge for watching ships land and take off. A large window looked over the shipyard, where various types of spacecraft were resting on the lunar dust. The window, made of Crysteel, invented by SRI's orbital laboratories, began about half a meter from the floor and extended to the ceiling and was about five meters wide. Crysteel, made in a factory in Earth orbit one atom at a time, was almost as strong as aluminum. Its one weakness was a very high index of refraction due to tightly packed oxygen atoms. It made great lenses but was not good for use where a clear view was needed such as spaceship windows and pressure suit helmets. But the picture window in the lounge would have been impractical without the Crysteel.

Four pressure-suited figures were moving across the plain. The suits were not SRI issue and they were carrying submachine guns. DeWite recognized them as a South African made 9 millimeter caseless that were favored by criminals who bought them on the black market.

One, carrying a 40-millimeter recoilless rifle, knelt just a few meters from the window and aimed. Fire shot out of the rear of the weapon, dying almost immediately in the airless environment. A flame licked a small intra-lunar shuttle followed by an explosion. The ship's skin crumpled and it folded in on itself in a slow, macabre death dance. An explosion marked the rupture of the fuel tanks. Fire burned until the oxygen ran out.

"Goddamnit!" DeWite exploded. "We need to get to the airlock."

Just then one of the four figures outside noticed the two Security guards. He tapped the others on their shoulders and pointed. The other three turned and again the recoilless rifle spat a fleeting flame. DeWite dived behind the bar—an easy task in the low gravity. The window exploded inward. Prince was thrown against the rear wall, his body shattered by the impact. Then the window exploded outward as the room decompressed. Prince's body was slammed against the bottom of the window and sucked out into the harsh sunlight.

He stood, aimed his shotgun, braced his leg behind to compensate for the low gravity, and fired. He was surprised he heard it at all. Must still be a little air in the room, some part of him thought.

The figure with the recoilless rifle was thrown back and blood ejaculated from its torn body. It was freeze-dried before it hit the lunar plain. The remaining figures turned with their weapons firing. DeWite barely heard the bullets hitting the wall behind him. His ears felt as if they were going to explode. He screamed, not in fear, but to empty his lungs to prolong his already forfeit life a few more seconds.

Pump, FIRE, Pump, FIRE, Pump was DeWite's whole existence. Another figure crumpled, spouting blood. Then the bullets ripped into DeWite. Blood flowed like a fire hose. FIRE—DeWite could no longer stand, even in one-sixth gravity. He sank to the floor and died in a puddle of his blood that was boiling and freezing simultaneously.

Ah, fellow MI and Army Vet. Nice to meet you.