SALE! Get your sexy Alien Next Door for only #99Cents!

Hello everyone! And a Happy Thanksgiving to all of my American peeps!

Tomorrow is the infamous Black Friday, which means SALES!

And the first book in my Alien Next Door series, ALIEN ADORATION is ON SALE for only 99 Cents at All Romance eBooks. Multiple formats are available for all ereaders. 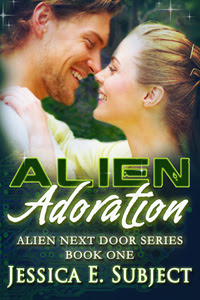