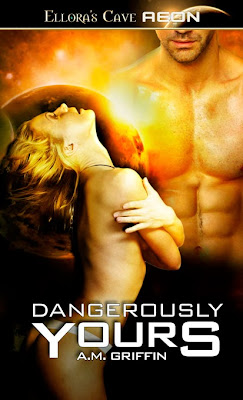 Hello everyone *waves* This is my first time on Backward Momentum and I’m excited to be here. I’m introducing book #3 of my science fiction, romance, erotic Loving Dangerously series, Dangerously Hers. Dangerously Hers takes us back to the moon Sonis where the first book, Dangerously Mine took place. I hate cold weather. I mean I hate it with a passion. So when I was building my new world I imagined somewhere hot. I didn’t want to go the tropical/paradise route, that would have been too easy.
So instead I made it a little too hot. I created two suns and made only one ocean on the entire moon. My world ended up being hot, dry and very bright, definitely not something that humans are used to.

In the beginning of Dangerously Mine, Eva, the heroine has a bout with being sunburned and had to wear a protective blanket when she went outside. It was only after Taio, the hero, built a protective covering over part of the training field did she really get to enjoy the outdoors. The people on Sonis don’t have a problem with heat. The females wear light and colorful long gowns while the males are usually bare-chested with training pants on. Bare-chest worked good for me, especially since they are all ripped warriors. Natives to this world aren’t much different from humans by much.

Since this is sci-fi I could have went way out and I do with some of the alien descriptions, but not for my main characters. I like the idea of falling in love with an alien, but there still has to be an attraction there. I didn’t want the readers to be thinking about the differences between my characters and not the story line. They are extremely tall, ranging from six and a half feet tall for the females to upwards of eight feet for the males.

Because of the sun exposure the natives are golden in appearance. I didn’t hold back on their eye color. Taio and his siblings have lavender colored eyes. Rasha, our hero in Dangerously Hers has amber colored eyes. A cultural difference is the participation of the males in an enlightenment ceremony. This is a ceremony that all young males go through as a passage to being a warrior. Once they have completed this, they receive an enlightenment tattoo that covers part of their body. Rasha has long black hair that he wears pulled off his face so that we can see his enlightenment tattoo. The tip of a light-blue-and-indigo wing covers one of his cheeks and extends down his neck and chest. Where, displayed proudly, was a vivid bird of prey in flight with outstretched talons. I think it’s really hot when the heroines get to explore their hero’s tattoo’s up close and personal for the first time. It makes for a great scene. I love this series and I hope my readers do too!a Rafflecopter giveaway You can also enter by going to: http://amgriffinbooks.blogspot.com/2013/10/big-cocks-and-broomsticks-giveway-hop.html 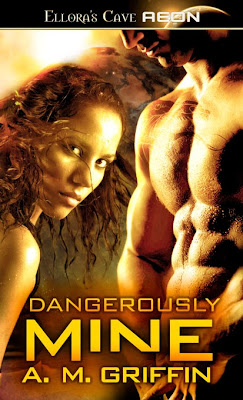 I have two more books on the way, Dangerously His and Dangerously Forever. My editor has them both and hopefully I’ll have some early 2014 release dates. I can't wait! Dangerously Hers Blurb: Loving Dangerously, Book Three Jess hates aliens. After the invasion that destroyed Earth, the extraterrestrial bastards sold her to a brothel as a sex slave. She may have escaped but the old memories and fears still linger in the dark corners of her mind. Supposedly Sonis is just the place for her—somewhere safe, where she can heal and start fresh. She’s almost hopeful…until she meets Rasha, her new boss. Rasha, Captain of the Sonis Royal Guard, is a warrior through and through. He’s huge, sinfully sexy and could have any woman on Sonis—but the woman he wants is Jess. He’s very much an alien and Jess knows she should hate him or at least be wary, but whenever he’s around, she loses control. She tells herself it’s only sex—amazing, mind-blowing sex like nothing else she’s ever experienced—but there’s something about Rasha that shakes her soul. The feel of his skin against hers, the look in his eyes as he touches her—they make her want to believe it’s possible to find love and begin again. A Romantica® science fiction erotic romance from Ellora’s Cave Amazon: http://www.amazon.com/Dangerously-Hers-3-Loving-ebook/dp/B00FWSTTKM/ref=sr_1_1?s=digital-text&ie=UTF8&qid=1382404909&sr=1-1&keywords=Dangerously+Hers Other books in this series: Dangerously Mine: Buy Link: http://www.amazon.com/Dangerously-Mine-ebook/dp/B00AO5CWSY/ref=sr_1_1?s=digital- 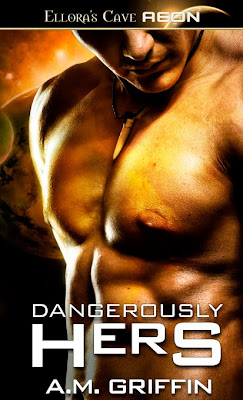 About the author: A. M. Griffin is a wife who rarely cooks, mother of three, dog owner (and sometimes dog owned), a daughter, sister, aunt and friend. She’s a hard worker whose two favorite outlets are reading and writing. She enjoys reading everything from mystery novels to historical romances and of course fantasy romance. She is a believer in the unbelievable, open to all possibilities from mermaids in our oceans and seas, angels in the skies and intelligent life forms in distant galaxies. Find Me Here Website: http://www.amgriffinbooks.com Amazon Page: http://www.amazon.com/A.M.-Griffin/e/B00APK4V4G/ref=sr_tc_2_0?qid=1380414029&sr=1-2-ent Facebook: http://www.facebook.com/amgriffinbooks Twitter: https://twitter.com/AMGriffinbooks Blog: http://amgriffinbooks.blogspot.com Goodreads: http://www.goodreads.com/amgriffinbooks Join me on Triberr! http://triberr.com/AMGriffin I’m having a giveaway that’s currently going on for the Big Cocks and Broomsticks blog hop. Feel free to enter!
Posted by D L Jackson at 12:30 AM

A sexy hero... Bare chested and in training pants sounds good to me. ;) I always like a man with a broad chest and back. And he has to be dedicated, faithful.

All the best with your new release!

Hi A.M and Jessica,
I have finished read you new e-book always enjoy it. Is the next book will come at the end of this year or next year
I wish you both a great week-end
Cheers