Clone--The Book of Eva. The most difficult story I've written to date. 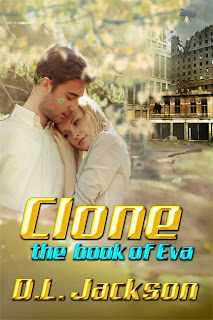 Five years ago I started a story. At the time, I wasn't sure where I'd submit it, as speculative fiction can be a difficult pitch. Often it doesn't follow an expected formula or fit into a specific genre or niche. This story spoke to me, and demanded to be told, but in a way that is completely different from anything I've written. I have to say it was the biggest challenge I had to date with my writing and forced me to stretch my mind and knowledge. In many instances I found I had to put a square peg in a round hole. I'm sure my editors can attest to how crazy the format made them--at times, it drove me nuts. It is my hopes that my readers not only see what is obvious, but read between the lines and find what is hidden or implied. I am a cerebral author and wanted a cerebral story. If anything, I hope this story makes you think and ponder things you might otherwise not.

You probably keep hearing me say, it's not a romance, but it is a love story. I was recently asked why. Well, first off, if you read the first few pages you already know where I'm headed with the story--almost. But, there's so much more involved in that opening than you see in the first few pages, in fact, some things won't become clear until the very end--even when I give you the ending up front.

Some things about Clone that made it one of the most difficult stories for me to write:
So, now you know a bit about this story, I hope you'll check it out. My hopes are it will engage both your heart and mind, and give you a story a little different than what I normally write. Buy Clone--The Book of Eva here for Kindle

I know how hard you worked on this one, and how many times you went back and forth on how you would lay it all out.

Congrats on getting it out there! I wish you all the best with it, and am looking forward to the next one in the series as well. :)