Time for a little shamless promo. Have you gotten it? Have you read it?
Why not?


When Shay lands on Elatia, she knows she has one shot to be chosen as courtesan for a king and queen. Mess up—everything she was born to be, all she’s trained her entire life to become—will be lost. The alternative is unthinkable.


What a pampered priss.


Dayne’s first impression isn’t a good one, but he’s determined to turn the spoiled beauty into the next royal courtesan at any cost. As a Dominus, a master of all things sexual, he agrees to help a friend, his sovereign, and promises to do nothing to compromise her future.

Except the promise may cause him to question his loyalty, friendship and honor. All he knows is on the line…when he falls in love with a woman who can never be his.


Shay knocked the hand away. “I’m not a princess.”


“We’ll you’re not an ornament for my transpod either. Get off. You’re drooling on my deck.”


Shay’s eyes snapped open, and she found herself face to face with the mud slug again. “Courtesans don’t drool.”


“You aren’t a courtesan yet, cupcake, and what do you call that puddle on the deck?”


She turned and her eyes widened. No, no, no. She’d committed the unforgivable. Her hand shot up to cover her mouth and chin, hopefully blocking the view of any spittle left on her face.


“Yup, Dayne’s going to have fun with you. What street corner are they finding you girls on these days?”


“They didn’t find me. They bred me for…why am I explaining this to you?” She kept her hand over her mouth, waiting for him to look away so she could take care of business.


He shrugged, dropped her bag beside the transpod, and headed for the front entrance to a large minnica spire.

She used her palm to wipe her chin and watched him go. “Hey, do I go in there?”


If he heard her, he didn’t indicate that he had. He entered, leaving her to her own devices. Okay, she wasn’t some helpless flower. She could make the introduction herself and didn’t need Mr. Personality’s help.

Shay reached into her bag, retrieved a mirror, and checked her face and hair. All evidence of the mishap had been wiped away, and without smearing her makeup. At least something had gone well. Once satisfied, she climbed to her feet with as much grace as she could muster, smoothed the fabric down on her overdress, and grabbed her bag.

Sometime during the trip to her new home, her right ass cheek had gone to sleep. Combined with the missing heel, she hobbled like a crone. Not the most elegant example she wanted to put forward, but also not her fault. Too bad about the boots. The heels were hand-carved crystal, irreplaceable, and her favorite pair. If not for the fact she had to undress to reach the tops to unbuckle her boots, she’d have changed on the transpod.


She stopped in front of the tall door and stared at it for several seconds before she found her courage. Shay cleared her throat. “Open,” she spoke in her most commanding tone. Stepping forward on instinct, she smacked face first into the hard surface, which had failed to vaporize as expected.


Shay reached up and rubbed the tip of her nose. What kind of freaking planet is this?


She poked it and cleared her throat. “Open.” The door didn’t move. Shay glanced around for a button, or something, anything to activate the mechanism that opened it. Lever? Fuck. Nothing but a round thingy. She bit her lip again. Certainly nothing as primitive as….


You have to turn the round thingy, honey. This time Milos’s voice came through by brainwave, telepathy, or whatever he was using to annoy the shit out of her.


Turn the knob. Open the door. It’s not rocket science.


“I know rocket science. I don’t need your instructions.”


“Of course you don’t,” the voice in her head said again.


Shay lifted her chin to look in the face of…dear gods. Dark hair, green eyes, strong jaw and chin. The man standing in the doorway had looks that would melt a woman where she stood. And she’d just called him an asshole, or he thought she did. Her mouth dropped open. 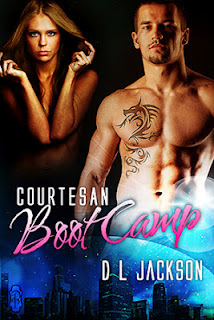 WIN A COURTESAN BOOT CAMP T-SHIRT IN EITHER, MEDIUM, LARGE OR EXTRA LARGE.

THE FIRST PERSON TO REPLY WITH THEIR FAVORITE COURTESAN BOOT CAMP MOMENT WINS!

My favorite part is when Dayne takes Shay to the club and she must seduce the sexy Siren.

No need to enter me.