Alien Invaders on my holidays?

I'm on holidays this week, and while we're not going on a vacation, we are taking some day trips, and renovating the house. While we had a babysitter, my husband and I decided to catch a movie by ourselves, something we don't do very often. On Saturday night, we saw the movie, THE WATCH. I really enjoyed this movie. Not only does it have three fabulous comedic actors, but it involves aliens. Woot! Let me just say, I cannot look at a Costco without thinking alien invasion. Drove past one yesterday, and wondered. LOL

So, here's a bit about the movie, THE WATCH:

Suburban dads who form a neighborhood watch group as a way to get out of their day-to-day family routines find themselves defending the Earth from an alien invasion.

And then on Monday, I went with my family to the Toronto Zoo.  We had a fabulous time seeing animals like the White Lions. They just sat up on their rock. The giraffes were so tall. We were all enamored by the swimming penguins, and even the polar bears. The huge male polar bear slept while the female swam her course over and over. And the cute, big baby polar bear played with balls, ropes, and large plastic bins.

But what caught my attention was this: 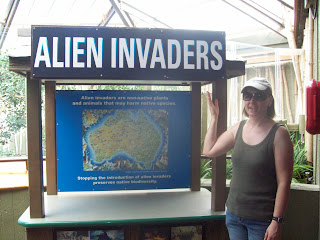 The sign discussed how non-native plants and animal species had been brought to Australia only to harm their native species. With the stories I write, I saw the word alien, and made a bee-line for the sign.

So, I've seen alien invaders at Costco, and the Toronto Zoo.

Have you seen "alien invaders" anywhere that surprised you?

Bio:
Jessica Subject started writing to encourage her daughter to read. Now she writes to keep herself grounded. Although she reads many genres, she enjoys writing Science Fiction Romance the most and believes everyone in the universe deserves a happily ever after. She lives Southwestern Ontario, Canada with her husband and two kids and loves to hear from anyone who has enjoyed her stories.