Sneak peak at upcoming release, THE POWER OF THREE 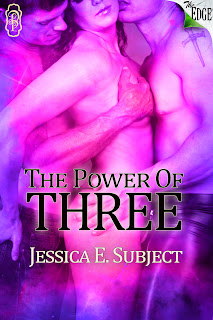 Hey everyone! I'm excited to say that the release date for my paranormal erotica short story is just over a week away. The Power of Three will release July 20 from Decadent Publishing as part of their erotica line, The Edge.

Normally, I'd give you a sneak peak into the story closer to the release date, but next Thursday, I'm going to be interviewing Nadia Scrieva on the blog. Oh, and I think there's a giveaway. :)

So, here's an excerpt from The Power of Three:

“I’m from Wigbay,” he stated. “I’m not sure how to explain where that is except to say, it’s in another dimension. I was sent here, trapped as a spirit inside your gargoyle statues when I refused to take on another female lover.”

On the day he’d been sucked away from his life partners, Catalis had arrived at his shared home, shouting curses and calling him out for not taking her as his mate. Against their advice, he left Lianna and Lewis on the love platform, anxious to dispose of their unwelcome visitor. But she had other ideas.

When he met her outdoors, she waved her arms in wide circles, uttering an ancient chant. Her malicious words drew the air around them into a swirling mass. Without the combined power of his mates, he was weak to stop her. Catalis used an energy field to bind him then tossed him into the center of the twister. Lianna and Lewis raced out the door and launched themselves onto the sorceress, but they were too late.

“You were in our statues?”

Oscar blinked hard, returning his attention to his hosts.

“I’ve been able to move amongst the gargoyles you own for the past year. It feels like forever since I’ve seen Lianna and Lewis—my mates, my lovers.” A wave of sorrow threatened to wash over him, but one glimpse of the sparkle in her eyes brought back his immediate need.

“You’ve been spying on us for a year?” Bo turned to his wife. “I don’t believe this shit about being trapped, but there could be hidden cameras in your statues. I swear, Delayna. I’m throwing every single one of them away as soon as we get this whackjob out of the house.”

“Please, Bo.” She whispered something in his ear and he smiled until he caught Oscar looking at him.

Bo stood up, letting the pillow fall to the floor. “Like what you see?”


For more information about The Power of Three and my other stories, please visit me on:

Oooh congrats on the upcoming release.

Thanks so much, DL, for everything. :)