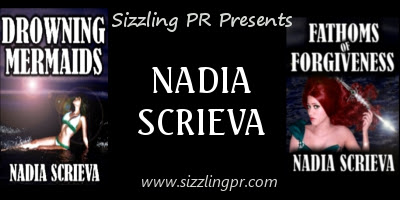 Drowning Mermaids
Deep under Arctic waters lies an ice kingdom carved into a glacier. Those who dwell within it possess magnificent biological secrets. Due to the dangers of impending war, the Princess of Adlivun is forced to flee her undersea utopia and regroup with her sisters in Alaska.

Captain Trevain Murphy is a successful king crab fisherman who has spent his life building his empire above the sea, and knows nothing of the empire beneath it. When he meets a mysterious dancer whose father has recently died, he extends kindness towards her, unaware of her unique genetics and royal lineage.

Trevain's attraction to the enigmatic Aazuria Vellamo will involve him in dangerous designs that will forever change his life, and his perspective on himself and his world. He embarks on perilous journeys in which he will need to release all of his insecurities and inhibitions in order to survive.

Fathoms of Forgiveness
There is no divorce in the undersea kingdom of Adlivun. Marriage is a bond that lasts until death—even if death comes in several centuries, and in that time your spouse happens to become your sworn enemy. This is the conflict that General Visola Ramaris faces when she learns that the mighty Vachlan is behind the attacks on her kingdom. She has sworn to protect Adlivun with her life, but long ago, she also swore to love and honor her husband...
Visola must choose whether she will destroy Vachlan once and for all, or attempt the hardest thing conceivable: communication. After two hundred years of desertion, she has no faith in their feeble bond and knows she can never forgive him. When he threatens the person dearest to her, she must take action. Confronting Vachlan on enemy territory would be nothing short of suicide. She knows that if she falls into his custody, the deranged man would relish breaking her down and making her lose her sanity.
Princess Aazuria forbids Visola from taking matters into her own hands; she will do anything it takes to protect her friend from the man who wants to crush her. Alas, Visola is a crazy, uncontrollable warrior woman with the blood of Vikings in her veins. Why would she ever consider doing the safe and predictable thing?

Author Bio
Nadia Scrieva was born and raised in Toronto, Canada, where she grew very strong from carrying heavy bags filled with books back and forth from the library. She attended the University of Toronto, graduating with a B.A. in English and Anthropology. She likes knives. Her writing always features powerful females and (mostly) honorable male characters.

Writing has been the most meaningful part of her life since she was a child. Nadia has an addiction to receiving feedback from readers, so do not hesitate to contact her with any of your comments or even just to say hello.

Oh what fun. Thanks for being a guest on our blog today.