I'm so excited to reveal the cover of The Power of Three, an upcoming release with Decadent Publishing, as part of their new erotica Edge line. This is my first paranormal romance, but it can be classed as scifi romance as well.

So, here's a little about the story first:


Cursed to live amongst several stone gargoyle statues, Oscar watches a young couple, yearning to participate in their sexual activities. For he has been away from his own lovers for over a year, and longs to touch and be touched again.

When he tumbles off the headboard onto the couple, he is released from the statue but must find a way home. His only thought: a ménage with the man and woman who freed him. But will they try something new to grant him his return passage, or leave him wandering Earth alone?

And here's the cover: 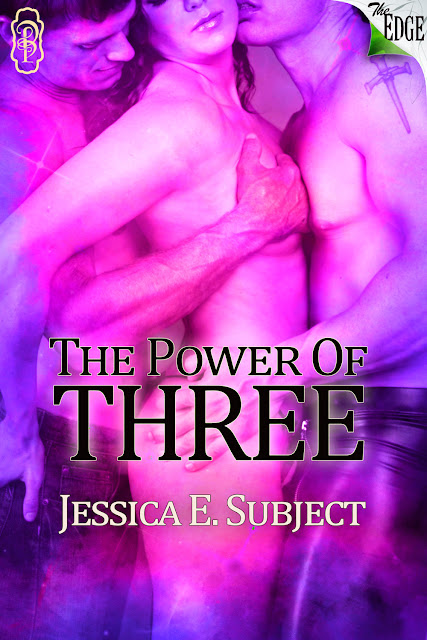 What do you think?

I love the colors - very eye catching. I also think the guys need to lose their pants too! lol - Congratulations!

Thanks, Savannah! This is the hottest story I've written thus far. :D

Sheri, I would have to agree. LOL Thanks! :)

Whoo, that is some cover! *fans self* It sounds very original. Can't wait to check it out!

Heather, the story started as a fun short after a conversation with a fellow author. Definitely hot! :)

Pretty. Love all the purples and pinks.

Thank you, D! It fits right in with my other covers. :)