Hello peeps! Today I'm celebrating the one-year book birthday for TWO of my stories. Satin Sheets in Space and An Unexpected Return were released within a day of each other in 2012. Hard to believe it's been a year already.

Anyway, here is more information about the stories, with excerpts. And keep reading to find out more about the giveaway! 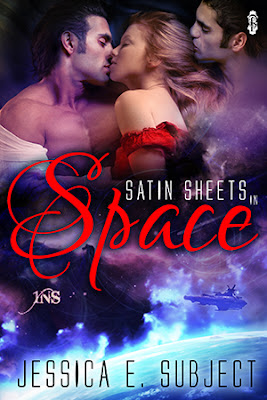 Danyka's unusual height and radiant red hair earn her the cold shoulder from any guy she approaches, unless he wants to experiment with a giant. So when her boss sets up on a one night stand, she hopes for a prince but expects the usual toad.

As a captivating stranger whisks her away from the ball and introduces her to his equally gorgeous brother, she fears her fantasies have become a nightmare. Has she finally given into impulse only to become a lab rat in an unknown world?

She had her eyes closed, her lips pressed against his, when the sensation started. First, a tingling in her hands and feet, as he swept his digits deep inside her. The buzz spread up her arms and legs until it engulfed her entire body. She no longer sensed the ground below her.

The man continued to drive his fingers into her core with vigor, ridding her of the urge to pull away and find out what was happening to her. She landed with a thud, feeling returning to her limbs. Nothing stopped the man who held her, though. He continued to ravage her mouth, her jaw, her neck, keeping her pressed against the wall.

But something felt different. Gone was the hard brick pressing through her corset and against her skin. She reached behind to brush her hand along the surface. Soft. Almost like cushioned satin.

With a whimper, she pushed the strange man away. Where was she? What had she been thinking? This is the stupidest, most insane thing I’ve ever done.

The Prince Charming she’d had the fortune of being set up with peered down at her, his gaze intense and filled with lust. “My name is Galan, and we’re in my spaceship.”

At least she now knew his name, but wait…. Spaceship? She stared at the man, disillusioned. She could think of no other explanation for how they had traveled to a new location with the press of a button. Oh God, she’d been abducted by an alien. How would she get out of this situation? The first time she’d done something spur-of-the-moment, and she’d ended up being finger-fucked by an extraterrestrial.

Or was this some kind of elaborate stunt Josh had pulled off? But why? He was on his honeymoon, unable to enjoy his handiwork. Her body grew numb; a loud ringing pierced her eardrums. She could no longer think with the clouds invading her mind. Then she blacked out. 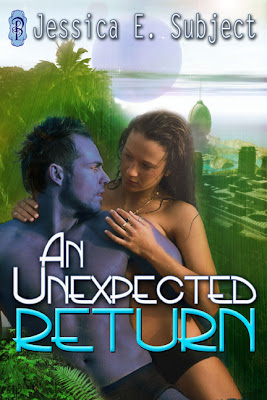 An Unexpected Return
An Elatia story

Looking to experience all the universe has to offer, Prince Aristides escapes from the kingdom of Tyto and travels through space to the Emerald Planet, Elatia. He yearns to partake in the activities the planet is famous for, and fulfill all his sexual desires, but loses his heart and soul to an Adamos apprentice. Unfortunately, she is Terran, and her people are sworn enemies of those from Tyto. If he can convince Xia to give up her dreams of becoming an Adamos, and travel back to Tyto with him, will his parents accept her, or condemn them both?

Will they have their chance to be together, or will their families tear them away from any chance of young love?

Walking into the silky rear-end of an oroke, she came to an abrupt halt. The creature had been walking at a steady pace and then stopped. She’d failed to notice in time. Wiping fluff off her face, she turned around and walked into another hard body. “I’m so sorry.”

Hands clamped down on her arms. “Are you all right?”

She stared up into deep brown eyes. Chewing her bottom lip, she nodded. If this man hadn’t been holding on to her, she would have fallen to the ground. The word swoon held no meaning for her until now.

Am I only like this because of the eletin I inhaled back home? Or was there something more she found heart-racing about the blue-skinned, well-muscled hunk of an Otarian who held her up?

No, she couldn’t feel anything for him. Their races had been sworn enemies for years. Everyone across the galaxy knew that. Yet here she was, standing face to face, gazing intently at him, with no will to move.

He smiled at her, drawing her attention from his eyes to his lips. How would they taste? She’d never kissed anyone intimately before.

Name? Gods, what was her name? “Zee…Xia.” Had she told him, or only thought the word?

He released her arms to brush his fingers along her jaw line. How she remained standing, she had no idea.

“Xia. A beautiful name belonging to a beautiful woman.”

Moisture pooled between her thighs. Her cheeks warmed. “Thank you.”

She sighed as he trailed a hand down her arm. Her entire body tingled from his gentle touch.

“You’re welcome. Now tell me, why were you in such a rush that you walked into the rear end of that slow-moving beast? We’re supposed to be on vacation, enjoying all this planet has to offer.”

Laughing at his description of the oroke, she leaned against his arm. Never before had she enjoyed a man’s attention like this. “I’m not visiting. I live here. Have my whole life.”

He raised his eyebrows. “Really? So, what was it like growing up on the pleasure planet?”

“I…I don’t know. Normal?” She couldn’t think clearly around him. Her tongue felt numb in her mouth.

His smile traveled all the way up to his eyes. He leaned closer and rested his hand on her hip. “Then perhaps you could be my personal tour guide,” he whispered in her ear.

He drew back and frowned, but she could still see the glimmer in his eyes.

“I’m jealous of whoever you’re going to be spending your time with.”

She giggled at him. “I’m just going to sleep. It’s been a long day, and I’m afraid I wouldn’t be good company.” There was no way she would tell him she had to spend a few hours that night with another man.

Losing the fake expression, he smiled again. “Tomorrow then? I’d really like to see you again.”

Woo-hoo! A man wanted to see her again. It made her feel like the most desirable woman on the planet. “Sure, I’d like that, too.”

“Great. Now, before you go, could you point me in the direction of the Delectacio Hotel? I have an appointment with an Adamo, and I can’t seem to find my way back.”

Her heart lurched. He’d flirted with her, made her desire him, and then thrown his appointment in her face. Would her life always be like this on Elatia, men seeking only sexual release and nothing more? In that case, she’d need to harden her heart, or end up lacerated by rejection. “Find it yourself.”

For your chance to WIN an ebook copy of both of these titles, enter the Rafflecopter draw below.

*Contest is international. Must be 18 or older to enter. Ebooks will be gifted from All Romance eBooks. Winner will be notified by email on June 6, 2013.

WOW!!!! Thanks for allowing me to find new and awesome stories. Marie melisk1966@yahoo.com

Happy Birthday to your stories! They both look great. I always love your covers. I especially like the second one with the intriguing blue guy. :-) Congrats!

Happy book birthdays! If I found out my date was an alien, I wouldn't be surprised. Most men are from another planet :)

LOL Elizabeth. Too funny! Thank you! :-)

If he is anything like your aliens from these books then I'll definitely see where the night would take us.

Thanks for writing and Happy birthday to the stories!

I'd have to hope he was like an alien from romance books.:-)

Thank you so much for the giveaway; fingers crossed!

Happy Book Birthday! I would have to find out if he was serious and if he planned on staying here or leaving. If so could he take me with him.

Lindsey V. - I agree. The other kind are just to scary to think about.

Ooooh, both of these sound wonderful! I think I'd freak out if I discovered my date was an alien.

May have to pick your brain sometime soon, for world-building help:)

would love to read on my cruise!!

Hi Molly! If I didn't notice immediately, I don't think i'd be worried.