Science and magic – one in the same?
Guest post by Cate Masters

Do you believe in magic? Or do you look for a logical, science-based explanation for what might look, to others, like the unexplainable?

Maybe it depends on whether you’re right-brained or left-brained. Whether you’re open to the seemingly impossible, or whether you need a concrete reason to explain away the mysterious.

If you’re like me, you’re a little bit right- and left-brained, and subscribe to what Arthur C. Clarke said – that magic is just science we don’t understand yet. With that scenario, anything truly is possible.

Ah, a writer’s dream. :) And I took advantage of that very scenario in Cursed. This novella doesn’t fit neatly into the paranormal category. It mixes in a bit of science and a twist on history. I’m not a fan of labels or categories anyway. I’m a rebel like that, lol.

Stories sometimes take on a life of their own. The more I wrote of Cursed, the more the story surprised me with new facets, and took turns I didn’t see coming. The characters kept surprising me, too, in the best possible way. They led me in new directions too. Cursed kept coming together in unusual ways, from disparate sources.

But that’s the best kind of magic, isn’t it? When a completely new world builds from nothing, and even you, the writer, aren’t quite sure how. But wow, what a cool ride it takes you on! The best high a writer can hope for. 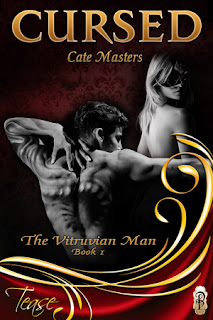 Here’s a peek at Cursed, book one of The Vitruvian Man:

Ten days of freedom. That’s all Fate had allotted me each year. In the streets of Venice, I could walk among them. Mingle. Belong.

During Carnevale, they had no idea who I was. What I was.

For ten days, it didn’t matter.

Until I met her.

Bruno diCesare lives alone by necessity, not choice. An experiment performed by Leonardo da Vinci, who believed having a dual DNA would grant a person immortality, used magic to render Bruno a chimera – the head of a lion, body of a dragon. The only time he can mingle with people is during Carnevale, ten glorious days of masked anonymity, frivolity and intimacy.

Melina Weaver learned fire dancing to enliven her dull existence. A scientist, her long hours at the lab leave no time for a social life. For ten days at Carnevale, she can pretend to be someone else. Someone sexy and daring, who lives on the edge.

Once she meets Bruno, her wish comes true, but everything goes terribly wrong. Beneath Bruno’s costume lurks an alpha male, but is he dangerous? Worse, can she return to an employer who sells her research to the military to make an army of efficient killers? Her only hope may lie with the man she’s just met and never seen.

I am super excited that Cursed is the first release in
Decadent Publishing’s new Tease line!

You can find out more about Decadent’s new Tease line at:  http://www.decadenttease.com
and news about this new line at its blog: http://decadenttease.blogspot.com/

Oh, and I’d love to connect with you, if we haven’t already! Find me here:
Blog | Facebook | Twitter | Goodreads

Thank you for visiting, Cate! There are some things I look to science to explain. Yet, there are other things I'm perfectly fine without a scientific explanation. Like love. :)

Thanks so much for having me Jessica! I bet there are some scientists who have a perfectly logical explanation for love based on actual chemical reactions, lol. I like Clarke's explanation, but sometimes it's best not to overanalyze too!

I have a novel like that, that doesn't fit neatly into paranormal or science fiction. Sometimes those genre-crossing novels are the best ones.

Pssst. All science was magic once, until it was proved fact. Cell phones two hundred years ago would have been magic, as well as flying or television. So, go make some science, and use a little magic while you're at it.

I love the way you think, Dawn! Probably because it's just like me, lol. And like this series! :)