A Buck A Book & WIN A Nook with Casea Major!!

Attention Backward Momentum readers! Decadent Publishing has a great promotion going on now - A Buck A Book WIN A Nook! You can get ebooks for only $1 from great authors. Plus, you can enter to WIN the draw for a Nook 7" HD Tablet.

They are already marked down on Amazon, Decadent Publishing, Smashwords, and ARe, and will be until 7/1.

Now, please welcome Casea Major, whose story Night With a Dom is one of the ebooks on sale.

Thank you for having me as a guest today in your lovely virtual home.

In my reading, I've found an exorbitant amount of oral sex. In the m/f romances I read, more than three quarters have some depiction of oral sex and that includes the mainstream non-erotic. Generally in the stories, the male is the giver and the female the receiver. But this flies in the face of actual statistics.

According to a survey done on AskMen.com -- The numbers on how many men have received oral sex from a woman and given oral sex to a woman in the past year show a perturbing discrepancy. It seems that men in nearly every age category are more likely to receive oral sex from their female partners than to give it. Only the 18- to 24-year-olds are tipping the oral scales in the other direction, offering more mouth action than their female counterparts. It goes without saying that a woman getting enough oral sex is a happier woman, and all the more willing to reciprocate. Read more: http://www.askmen.com/daily/sex_tips_400/418_sex-stats-you-can-use.html#ixzz1pacP9Y7n

In my release with Decadent Publishing, Night with a Dom, my heroine strongly desires oral sex – an act her ex-boyfriend had been unwilling to perform. But on her New Year's Eve 1Night Stand, Mel gets more than she bargains for with Dominc, her date and Dom for the evening.

So tell me, how do you feel about oral sex in life and literature? Do you mind pitching or catching? 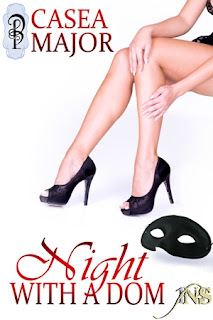 Night with a Dom by Casea Major

Melody Manning’s workaholic ambition, coupled with a slave-driving former boss, has made her the youngest market analyst in her firm. It’s also killed her personal life, including losing her fiancé. When she receives a message from him on New Year’s Eve announcing his engagement to another woman, Mel loses it. Her new, more compassionate boss has the perfect solution for her—get laid. Good and laid.

At his suggestion, she signs up with the 1Night Stand service, listing her deepest sexual desires on the application. A speedy response from Madame Eve has Melody on her way to Sonoma Valley wine country and a one-night stand with a mysterious Dom.

The sexy, masked Master promises to get to the bottom of her guilt and provide ultimate satisfaction under the safety of his stern hand. After an emotional night of submission and uninhibited passion, will her lover’s unmasking lead to the end of their encounter or give Mel another chance at love?

Prior to becoming a writer of romantic fiction, Casea Major worked in the legal field for a non-profit dispute resolution company for ten years. She is now a full-time mom to three preschool children with whom she and her husband live happily...most of the time. When she isn't chained to her laptop, she enjoys Cary Grant movies and crocheting.

And enter the giveaway here:

a Rafflecopter giveaway
Posted by Jessica E. Subject at 12:00 AM

Oh, I never really thought about that, but yes, most of the time, it is the male giving to the female. Hmmm... Great post!

Jessica, I think about this stuff all the time but only because I have to for my stories. That's the only reason. LOL thanks for hosting me today.

I try to get both my characters to reciprocate :-)

In my books, it's usually him on her, but sometimes it's the opposite. It depends.

I usually include oral sex in my books. What I didn't know, probably because in the '80's I was already married and had a child, was that it was a taboo subject. It wasn't that way in the late '60's and '70's. Tweeted.

Thanks for the giveaway.
And I love a good oral sex scene, giving or taking. Its hot to read.