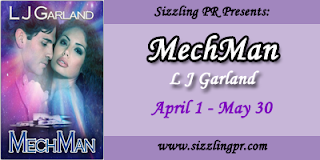 I'd like to welcome L.J. Garland to the blog today. (For those who don't know, L.J. Garland is a husband and wife writing team.)

LJG: Thank you for having us here today! We’re looking forward to the interview.

It's a pleasure. Can you tell us how long you've been writing with the hopes of publication?

LJG: We wrote for about five years before getting published. The first story was enormous…like 240K or something crazy like that. Yeah, it’s in a drawer, locked away. LOL But the next two stories were more realistic, coming in around 80K. They both got sold around the same time. But during those five years of writing, we studied the craft like crazy. Heck, we’re still studying it. This business tends to be fluid, so you have to watch what’s happening.

How did you get started?

LJG: Hmm, well, it wasn’t until I met my husband that the bug really bit. This story idea just jumped into my head, and I came home from work one day and said, “Honey, I want to write a book.” He was like, “Okay.” We discussed the plot and characters, the setting, etc. until we both agreed (we were on the same page <g>) So, off I went to write the first few chapters. Around chapter five, I decided to stop and show him what I’d done. I’ll tell you, there’s nothing so intense as sitting by, gnawing your nails, while the man you love reads what you wrote. Course later he told me that he’d been just as nervous. Before he ever read the first word, he wondered how he would tell me if it sucked. LOL  We’ve been writing together ever since.

What genres do you write in, and what appeals to you about those genres?

LJG: We write romantic suspense, sci-fi romance, paranormal romance, time travel romance. We love them all. There’s two things that appeal: 1. the romance genre itself leaves the door open for any genre 2. All of these set the stage for an excellent chance to blow something up. LOL We love high-action stories, lots of peril, and an intense relationship between the hero and heroine.

What titles do you have published?

LJG: On the Fringes – He’s an intergalactic thief. She’s the law. He’ll cross the universe to steal her heart. (SFR)
Cadence Interrupted – He knows she’s keeping secrets. The only thing she trusts are her skills as a pilot. (romantic suspense)
MechMan – She wants revenge. He wants to be human. (SFR)

Do you have any recent or upcoming releases?

LJG: Dead or Alive – Accused of murder, he turns to the only person who can save him. Too bad she’s a bounty hunter who holds a grudge. (Decadent Publishing, 1Night Stand, SFR – May 5)
Sins of the Mind – He wants to protect her, but everyone she loves is dying. Is he next on the killer’s list?


Where can readers find you?


LJG: We can be tracked down at www.lj-garland.com. Or we can be caught at http://www.garland-and-gould.blogspot.com/ where we blog, chat about stuff, and interview other authors. Or, we can be emailed at mail@lj-garland.com - We love hearing from people who have enjoyed our stories.

Where can readers find your books?

LJG: On the Fringes –  Kindle 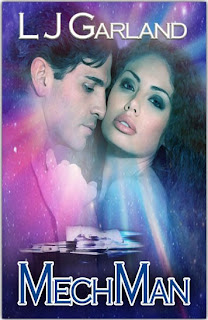 
Raven is on a suicide mission. Jex is a biomech on a mission to save humanity. They discover their mutual passion to destroy the enemy isn’t their only desire.

A war against the Darch has raged for years, and humanity is on the verge of extinction. Scientists have created biomechs to supplement as warriors, but it’s just a temporary fix on what appears an insurmountable problem. One desperate scientist injects JXS241, a biomech warrior, with what he hopes is the solution for mankind’s survival. But the biomech is captured by the enemy.

Raven Nirvanni survives on the fringes of a shattered culture. While on a self-imposed suicide mission to annihilate an enemy destroyer, she encounters the imprisoned biomech. Deciding the fate of humanity far outweighs the destruction of a single ship, she recues him and decides to ensure he reaches his destination.

With the enemy anticipating their every move, Raven is completely taken aback when she realizes she’s falling for JXS241. But can she really love a machine? And if so, can he reciprocate?


The needle slid between the third and fourth vertebrae in his neck. A flash of heat shot through him. More pressure was exerted to penetrate the synthetic cartilage of his neurospine.

Accessing his internal response center, he raised the pain threshold, but not so high he couldn’t monitor the procedure. Immobile, he waited for it to be finished.

“No change,” he said, and reset his pain threshold. “As you said, Doctor Mechins. Just a pinch.”

“Good.” The doctor made a note on his techpad. “There are three biomechs just outside the lab, waiting to escort you and the information I implanted into your neurospine to the planet Altaiga.”

“Give me a ship, doctor. I’ll get myself to Altaiga.” Taking three biomechs away from the war to act as escort was a waste of resources.

“The information you carry is critical to the war effort.” Dr. Mechins tapped the techpad. “You’ll take the escort.”

JXS241 rose from his chair. The decision was illogical, but sometimes humans determined situations based on feelings rather than sound military strategy. He yanked a black shirt over his head and shrugged into his military-issue jacket.

The science lab shook, equipment toppled, and assorted paraphernalia crashed to the floor. Alarms barked to life, an alert that the base was under attack. Dr. Mechins’ reserved manner morphed to terror. His gaze rolled toward the ceiling.

“They’ve discovered us.” He grabbed JXS241’s arm, dragged him to the lab door. “You’ve got to get out of here. Take the other biomechs, commandeer a ship, and get to Altaiga. The fate of humanity may very well depend on you.”

JXS241 stepped through the doorway. Three heavily armed escorts awaited him. One shoved a pulse rifle into his hands. He grasped the familiar weapon, glanced at it, and toggled the setting to kill.

“Wait.” The doctor clutched his shoulder. “You may notice some changes—”

The lab exploded. Hot twisted metal and glass missiled through the air, spiking everything in its path. A rush of heat shoved Dr. Mechins against JXS241, and they tumbled into the outer hallway.

Hands grabbed the biomech, lifted him to his feet, and propelled him away from the lab. On the floor lay the doctor, ripped metal and shards of glass jutting from his back, blood pooling beneath him.

“Medic required at lab, level seven,” the tallest biomech said into his com-band. His gaze shifted from the doctor to JXS241. “In line, soldier. Primary objective is to obtain a ship and fly out.”

JXS241 moved behind the other biomechs, and they hastened to the hangar where pilots scrambled to their fighters.

Scattered throughout the bay, sparks of light appeared and stretched into beings. Six-and-a-half to seven-foot men and women materialized. Graced with flaxen hair, and beatific smiles, immense gossamer wings protruded from their backs. With a serene facade they surveyed the hangar.

The enemy had arrived.

L.J. Garland is a husband-wife writing team who has thrived within their own romance for over 20 years. One of their favorite things to do is get into a hot bubble bath and brainstorm story ideas. Amid their long list of hobbies and interests, two activities stand above the rest. They are both licensed helicopter pilots with hundreds of hours of flight time, and they practice with a variety of weaponry from long bows to high-powered combat rifles. This, along with years of military experience, gives their books a heightened sense of reality. They enjoy their life together in a house filled with love, laughter, and adventure along with their three cats, whistling guinea pig, and three boisterous sons—who conspire to ensure there’s never a dull moment. They love hearing from readers who’ve enjoyed their stories at mail@lj-garland.com.

For more of the interview, pleases visit http://jessicasubject.com on May 23.
Posted by Jessica E. Subject at 6:23 AM

Holy smokes! Now that's what I call an excerpt.

Why thank you, hon!

Why thank you, hon!

A fun interview! think its so cool you write together! LOVED MechMan and looking forward to reading On the Fringe!

Your backgrounds are perfect for romantic suspense. Helicoptor pilots--arms specialists. What could be more exciting and appropriate?

Oh Betty...the bubblebaths are a requirement! LOL No one agrees on everything, right? But those decadent soapy bubbles sure do soothe the situation and bring out wonderfully creative solutions. ;o)

Pauline - So, glad you loved MechMan. I'm wondering if I should come up with a second story in the universe.....

LOL Jacqueline! I couldn't agree more. And after all that flying and shooting, well...we're off for another soak in the tub.

Thanks Joe. Glad you stopped by.

Hey, L. J. Garland!
So good to see you, and I enjoyed reading about you both!
Happy writing!

I love the bubble bath idea. Now, I've got to try to convince hubs...

Thanks for stopping by, Vastine. Glad you enjoyed the interview!

Hey, Harlie! Thanks for dropping in. And as for the bubblebath...I'm sure you can make it worth his while... ;0)

So nice to have you on Backward Momentum. I have MechMan and I love it. I'm also a sci fi nut, so I tend to jump on them when they come out.

My name is Marlene and I'm a professional blogger.

I have over three years of experience writing for the web and have covered plenty of interesting topics.

I noticed that you have a blog and was wondering if you would be interested in allowing me to write relevant, useful topics on your blog at no cost.

At this point in my writing career, I simply want to get more visibility for my writing and I will write for free as long as you are okay with me adding a small author bio section next to each blog post about myself.