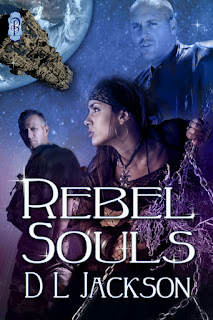 To celebrate two of my upcoming releases in June, that are science fiction romance, Rebel Souls and Courtesan Boot Camp, I'm going to be blogging about all things science fiction for my next few posts. Today I wanted to talk about some of the fun and interesting things I picked up while researching my novels.


When I research my science fiction romance novels, I always come across some interesting things you don’t think about when you’re grounded on Terra Firma. Here’s a few.


The stronger the gravity, the faster you age. So in theory, the further off a planet you are, the longer you’ll stay young. Anyone for an extended trip to the moon?


If two pieces of metal touch in space, they will permanently bond together. Wonder if that would help with the patching of a ship’s hull. Hmmm. Instant welding. Got some possibilities there.
The Earth gains 100 tons every day from falling space dust. And one has to wonder just what is in that space dust raining down on us. Another plot possibility.
Venus is the only planet in our galaxy that rotates clockwise. My husband says that’s just like a woman. Pthhhhhhhh. Hey, it seems the only planet going in the right direction, is named after a woman. Sound familiar?


If you go into space unprotected, you will last approximately 1.5 minutes without permanently damaging your body. After that, things get ugly. On a side note, holding your breath in space with kill you, as gases in your lungs expand. Also, moisture evaporates away rapidly, so you’d be more likely to get sunburned than flash frozen. The only man who suffered exposure in space and lived to talk about it, described the moisture on his tongue boiling away.
Astronauts can’t burp in space. Wonder if it’s the same for passing of “other” gas? Considering the close quarters on a shuttle, this is a blessing indeed. That’s going out to all the women who have had their men roll up car windows and lock them while they turn the vehicle’s cab into a stink bomb. (I know I’m not the only one who’s experienced this atrocity. Am I?)
There are two golf balls on the moon. Not real green, but hey, I bet they got some distance on that drive. Okay, ready for some science and excerpts?


She stopped in front of the tall door and stared at it for several seconds before she found her courage. Shay cleared her throat. “Open,” she spoke in her most commanding tone. Stepping forward on instinct, she smacked face first into the hard surface, which had failed to vaporize as expected.
Shay reached up and rubbed the tip of her nose. What kind of freaking planet is this?


She poked it and cleared her throat. “Open.” The door didn’t move. Shay glanced around for a button, or something, anything to activate the mechanism that opened it. Lever? Fuck. Nothing but a round thingy. She bit her lip again. Certainly nothing as primitive as….


You have to turn the round thingy, honey. This time ’s voice came through by brainwave, telepathy, or whatever he was using to annoy the shit out of her.

Shay lifted her chin to look in the face of…dear gods. Dark hair, green eyes, strong jaw and chin. The man standing in the doorway had looks that would melt a woman where she stood. And she’d just called him an asshole, or he thought she did. Her mouth dropped open.


Outside of the Ruellan prince, he had to be the most attractive man she’d ever seen, and even then, he might even be more handsome than Tavin. He had a good four inches on her, making her five feet nine feel petite. The tall drink of Dominus wore loose-fitting pants like her martial arts instructors, and no shirt, unlike her martial arts instructors.

On his chest he bore a tattoo of a Ruellan military insignia from a spec-ops unit made up of Toric soldiers—for-hire mercenaries. The tattoo, a dragon-like creature known an avenger, whipped its tail around, moving across the surface of his skin through a nanite-infusing technology. The nanites were housed in microscopic beads that made up the ink used by the artist. They were programmed to change the color inside each bead, going from clear to any hue in the spectrum within a micro-second, creating a moving picture that could travel from head to toe on its host, if the person had been tattooed in that manner. A lengthy and painful process, Shay had only ever seen pictures of it before.


The avenger opened its mouth as though it were roaring, and slipped down his chest, across his abs in a serpent-like, undulating motion, sliding back up onto the opposite shoulder, where it wrapped its tail around his arm before freezing in place.

It was not uncommon for a Toric to be tattooed in such a manner. The general population of the mongrels had a touch of sadism, making her wonder if what told her were true—that he didn’t like anyone.

Most Toric were mixed breeds, with roots on every planet in the galaxy. Full-blooded Torics were rare and most often were advisors to royalty, or like the little asshole, , close to the royals.


And dear gods, abs like that really existed in more than airbrushed images in holo-mags. Her head began to spin and Shay grabbed his arm to keep from swooning.


He glanced down at her hand and back up to her face. “I hope your manners are better than I’ve seen thus far.”

She yanked her hand off. Heat flushed through her body, certainly turning her a nice cherry red. Again, an inappropriate response for a Ruellan courtesan. “Oh shit.” Followed by another—she was making a stellar impression.

The corner of his mouth twitched. Are you coming inside?

She sucked in a breath and stepped inside. Fantastic, another mind-reader. “Dayne?”

Ah, tattoos that move by nanite. Wonder if it travels to other places on his body? To find out, check out the story releasing June 27th.


“Ava!” Uncle Theo barked above the alarms. Ozone rolled across the deck, and overhead lights blinked on and off with a buzzing pop, creating a strobe effect. “A little help here. We’ve got a League destroyer off our port bow.”


“I’m working on a plan B.” The destroyer had already fired once. The shot clipped their hull close enough to start a fire in the forward control panel. The deck erupted into chaos, and the crew scrambled to extinguish the flames before they spread through the oxygen-saturated environment.

“Going as fast as I can.” A holographic dome encased her, providing a three-hundred and sixty degree view of her controls, readouts, everything she’d need to get them out of the situation they were in. Uncle Theo was right. None of it was worth a damn if she didn’t out-maneuver them, and quick. Captain Ava Frost spun her seat and hit the navigation charts. A blip on the dome indicated the Avira, her ship, had moved within range of League cannons, more than confirmed by the shot from the Regulator vessel. The next one would punch a hole in the Avira’s bow, and they’d crumple like foil if she didn’t get her ionic shields up. “I see her.”

“They’ve got backup. Two off the starboard.”

“Fantastic. They want to make it interesting.” Ava whirled the other way and brought up the schematics of their ships. “Got them. Make that four League Destroyers. We still got a buddy on the other side of that wormhole.” She eyed the screen. Too much attention for a small time smuggler. “What are they all doing here? They don’t normally patrol together.” Whatever it was couldn’t be good. From the grim expression on her uncle’s face, he’d come to the same conclusion. If they wanted to get out of this alive, they’d need to lose them.

And she’d investigate later. Ava ignored the wailing alarms and the burning in her throat and eyes. She had to focus, or they were done. Her uncle never surrendered his ship, so there wasn’t a question as to what she’d do. It was the how she hadn’t figured out.

No, the destroyer wasn’t docking with her ship, and they sure as hell weren’t boarding. The Galactic Regulators, pit bulls brought in by the United League of Planets to enforce law in League space, had locked on to their position, and it would only be a matter of moments before they made link and demands. Of all the police forces out there in the universe, they were up against the most highly trained and diverse group of law enforcement. Every world with membership in the ULP sent their top candidates to train and serve as League Regulators. Most Regulators came from military backgrounds in special operations and thrived in hostile environments, looking for trouble wherever they could find it. There would be little she could do to surprise them, but that wouldn’t stop her from trying.

Those are fascinating space facts. Always love when that kinds of information is revealed in a story. :)

I can't wait to read these two books. Great excerpts! :)