Hello and thank you for joining me today! Last week, I talked about some of the music that inspired The Underground futuristic dystopian series. And today, I'm going to share some of the futuristic technology that is mentioned in the series.

Most of the technology that I used in the stories is based on my years of watching Star Trek, and also some Stargate SG-1.

One of the first things I mention is the portal, a doorway that connects to distant locations separated by spacetime. In the case of The Underground, the portal takes people from Earth to the distant planet, Airondelle, where Planet Core is trying to establish a colony. But these portals do not exist. There are no shortcuts through space or time. Or is there? Last year, NASA discovered that there are hidden portals in Earth's Magnetic Field. Not exactly the same as those in my story and in the Stargate shows, but it could open the doors to that technology.

The med-inject mentioned in Never Gonna Let You Go is very much like the new Insulin Injection units. There is no exposed needle. The unit is simply placed on the arm, and when pressed down, the medicine is injected into the body.

And then there's the laser gun, mentioned and used in Never Gonna Say Goodbye. While the rebels are armed with the firearms common with our ancestors, Planet Core's forces have laser guns. The rebels stand no chance. While there are no true laster weapons available to consumers, this article talks about some of the military lasers in development.

So, while science fiction authors mention all sorts of technology that has yet to be common place, there are scientists out there who are working on developing them. Like those who are trying to build The Enterprise.

What technology from science fiction would you like to see become reality??


Oh, and don't forget to grab Never Gonna Let You Go for only 99 Cents from Amazon or All Romance! Today is the LAST DAY to get it for this price! 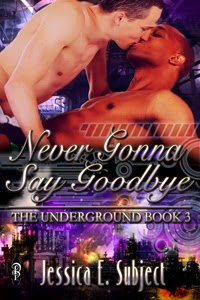 Isn't it ironic that so much "new" technology in the original Star Trek is reality today? So what seems farfetched today will become reality in the near future. Wishing you the best with The Underground series.

Very true, Diane! Still waiting for the hoverboard from Back to the Future though. ;) Thank you so much!

I'll be sending my husband this blog. He is a music person, trying his hand at writing. Would be interesting to see what he has to say! Thank you for all the insight.