Hello everyone! The buzz of a new release is leaving me very anxious. ANOTHER NIGHT, ANOTHER PLANET releases tomorrow. Woot! Now, when I get asked which of my stories I like the best, this one definitely ranks up there. I had so much fun writing this story, and I can't wait to share it with you. So, I'm going to share an excerpt below. And be sure to visit my blog tomorrow for all kinds of giveaways and release day fun. 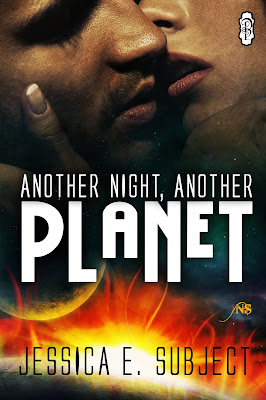 Ava hit send on her application to the 1Night Stand dating service. No time to wait for a reply. She shoved her tablet computer into her carry-on, slung the bag over her shoulder, and rushed out the door. With the Star Spirit scheduled to leave Earth in two hours, she had to zip through town to clock in before liftoff. She hoped Madame Eve would find her perfect match during her six-month tour.

Sure, she’d met many men in her travels between the Milky Way and the Belvarian System. But most looked down their noses or other appendages at the woman who cleaned their room. Those who showed an interest wanted a quick fuck before sending her away with their trash and dirty sheets.

She longed to find a guy to wine-and-dine her, to share conversation rather than a roll in the hay. Not that she’d complain about having sex with the guy Madame Eve chose for her during their guaranteed one night together. But she wanted to leave the date satisfied, mentally and physically.

Buzzing through the heavy traffic on her hover bike, Ava reached the spaceport in record time. Perfect. She found a parking locker in the cold, dank underground lot to squeeze her bike into then dashed toward security. If she could pick up a faint signal, maybe she would have a chance to check her email one last time before takeoff. Unlike the guests on board her mother traveler, she couldn’t afford to connect her tablet to the wireless system, not since she’d paid for her one-night stand. She used her once-a-week employee video call to speak with her mom and dad.

Raised by middle-class parents she’d had little chance of furthering her education past what the government paid for. When her father had received a pink slip from his employer of twenty star cycles, any hope she’d held of going to college flew out the window. Without an advanced degree, she found nothing but meaningless jobs paying her less than the effort she put into them.

Bags checked, Ava dashed down the plain white corridors of the employee level, pausing for the vacuum seals to release on doors along the way, until she reached her room for the duration of her stay. After thumbing the security pad to open the door, she crashed on the bed to the left, the right one belonging to Michelle, her best friend, who had convinced her to apply to housekeeping aboard Star Spirit. They interviewed together, starting space training the very next day.

Four star cycles later, she enjoyed a quick moment to rest before venturing out on her seventh tour. Though she didn’t have much of a life traveling through space, she received better pay than she would find anywhere on Earth. Providing her basic needs of food and shelter while on-board, the owners of the ship also compensated her well enough to split her earnings between her parents and her savings account when she returned home. She couldn’t let the people who had raised her suffer because she’d found an opportunity they hadn’t.

Yanking her tablet from her bag, she flicked it on, connecting to the Internet. Finding a faint signal, she logged onto her email account, praying her application went through. She scanned her new messages, deleting game requests, jokes from her friends, and e-flyers as she went. There, at the very bottom of the list, sat a message from Madame Eve.

She clicked it open, her heart hammering in her chest as she read.

Thank you for your application to 1Night Stand. I will do my best to find a man who will meet your desires. Your scheduling circumstances have been noted. As soon as your date has been arranged, I will let you know.


Another Night, Another Planet

Ava is a housekeeper aboard Star Spirit, a luxury cruise ship travelling between the Milky Way and the Belvarian System. Coming from a middle-class family on Earth, she is considered by passengers as nothing more than an object to be tossed away when they’re done with her.

Banned from several planets across the universe, Nate struggles to run his interstellar shipping business. But the DNA of an exterminated race runs through his blood, giving him a diluted form of their powers, and leaving him labeled as a terrorist.

Will Ava and Nate find what they’re looking for, or will their date be just another night on another planet?

Available from Decadent Publishing and other eBook retailers.