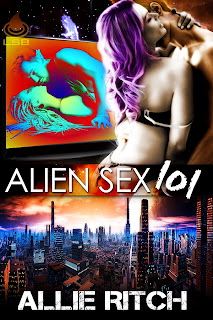 Alien Sex 101: When New Earthling Quinn makes love to his Allurian bride on their wedding night, he discovers a few surprises. Like the fact that losing his virginity to an Allurian woman is painful. He and Xindra are able to work things out, but they realize other interracial couples on their planet face similar problems. They start an Alien Sex Ed class, but this isn’t your ordinary anatomy lesson. This class is very hands-on and more than a little steamy. Xindra’s friend, Mera, is the first to benefit when she meets and falls for one of their students, Trett. As an Ibration, Trett doesn’t thrust during sex; his penis vibrates. That’s perfect for an Oquaran like Mera, who’s so sensitive she comes almost instantly and can’t stand a lot of chafing. When Xindra and Quinn notice more than one of their students checking each other out, they have to wonder. Could the romance between Trett and Mera be just the beginning? 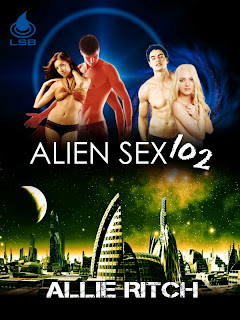 Alien Sex 102:  As a Duosien, Katra’Ruma needs a perfectly controlled lover to hit her two T-spots and trigger her orgasm. Unfortunately, the only man she’s found who can do that is an overbearing, egotistical, irritating Brachoi male named Krux. Sure his four arms come in handy and are as arousing as his lickable cherry-toned skin, but the man drives her crazy. Out of bed, they do nothing but snipe at each other—or is that just foreplay?

Used to casual sex, Whitt discovers he’s in over his head when he falls for Spri, a Litting woman who considers lovemaking a sacred rite as binding as marriage. He should be running the other way. Instead, he finds himself seeing just how far he can push things before taking that final plunge. 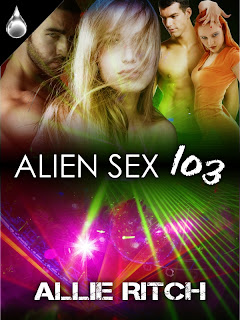 Alien Sex 103:  Corporate spy by day and party boy by night, Varion thinks he has it all when he hooks up with fellow Sex Ed student, Benni. As a Flexian, Benni is a natural contortionist, able to get into sexual positions he has always fantasized about. She loves the way his race can shift their features and skin tone to look like other people. It’s all passion and good times until Varion starts to wonder if Benni only wants him because he can look like different men. And when Benni discovers Varion’s corporate espionage may destroy her job, she questions his motives in pursuing her. Is their relationship real or just a game that’s turned all too serious?

Used to being the shy young virgin, Pixie is shocked when Zeo, the fierce Nimanian student in her Sex Ed class, takes an interest in her. Step by step, Zeo awakens her sexuality and teaches her the joys of being a woman. He wants to mate with her in the tradition of his people, but Nimanian sex can be rough. Can Zeo be gentle enough for the woman he loves? Does Pixie have enough strength to match him? 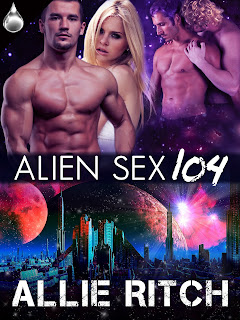 Alien Sex 104:  Huv has always liked the ladies, but he’s getting to the age when he’s ready for more than one-night stands. After meeting Lexy, he finds it very easy to fall for the sexy alien in her female form, but that’s only half the equation. Lexy is Cedecian. Every month, her race changes genders. Huv suffers a sexual identity crisis as he struggles to accept that the woman he loves may also be the man he loves. For an Allurian who is used to being strictly straight, it’s an adjustment Huv isn’t sure he can make.

Expecting Glynn to pop the question, Deina is shocked when he instead asks her to have his baby…or at least try. As a Semhym, Glynn must find a woman with just the right chemistry to help him spill his seed before it’s too late. He thinks Deina may be the one, but he wants to be sure. In order to win her over, he’ll have to gamble for the highest stakes of all: sex, love, and the rest of their lives.

Quinn was thirty-six years old, and he was about to make love to a woman for the first time in his life. The thought made him laugh as he settled their luggage in the honeymoon suite. Over the years, he’d had more one-night stands, quick lays, and weekend flings than almost anyone else living in Trilanta, the largest city on the space-hub planet of the same name. But he’d never cared enough about those women to call it lovemaking. Xindra was different.

She wasn’t just another conquest, and she wasn’t even from New Earth like he was. His beautiful Allurian was everything he’d never realized he wanted or needed until she stole his heart. And as of two hours ago, she was his wife. They were now officially Mr. and Mrs. Phlyx-Nigel.

Quinn kept waiting for panic to kick in—the commitment phobia that had kept him a bachelor for so long—but it didn’t surface. Instead he felt the sinuous warmth of lust and anticipation rolling through his veins. Because Xindra was special and because he’d wanted to make sure she believed that right down to her soul, he’d waited for their wedding night to make her his. Now he felt like he’d been through months of hellish foreplay. He was ready to explode.

“Finally, I’ve got you all to myself.” Xindra purred as she wrapped her arms around him.

Her head only came as high as his chin, but Quinn knew his wife’s trim body held incredible strength. He felt her breasts squash against his chest as he pulled her closer and luxuriated in their firmness. She had to feel how firm certain parts of him were growing as well. Looking down into her deep lavender eyes, he felt love flood him until it overwhelmed and then mingled with his lust.

“You are so incredibly beautiful.” In all his life, he’d never delivered a line so sincerely, so without thought.

Her answering smile undid him until he couldn’t remember his own name. She lifted onto her toes just as he dove for her mouth. They joined somewhere in the middle. The hard aggression of his lips met the soft pillow of hers. Then they were slanting and shifting while their tongues wrestled. By the time they broke for air, his pulse pounded like a jungle drum in his temples and groin. He was fully erect, and the sight of her flushed cheeks made everything jerk tighter inside him.

Clearly reveling in her power, Xindra flashed her white teeth and backed out of reach with a teasing glint in her eyes. She slipped out of her shoes and started a slow, sensuous dance as she reached for the closure seal on her dress. Quinn’s eyes feasted on the erotic curve of her waist, the flare of her hips, and the gentle rocking motion of her tight backside. The dress was open all the way to her tailbone now, but he caught only the barest glimpses of pale skin beneath her long, curly locks. Her hair was such a dark purple it was nearly black. It glimmered like strands of royal satin.

“Well, husband, do you plan to consummate this marriage fully dressed, or would you like to join me?” She slipped out of one sleeve and then the other until the bodice of her dress clung by a thread to her tightly furled nipples.

To his surprise, Quinn laughed aloud just from the sheer joy of being with her. He was going to remember this night for the rest of his life.

“Impatient?” he teased her, already sliding his own shirt open. “Your relatives did have a few ribald suggestions for me at the reception.” The bawdy Allurians had managed to make him blush, which wasn’t easy.

“Maybe we should explore some of those suggestions,” she replied, but she was distracted now.

He discarded his shirt and watched with pleasure as she licked her lips. Then she dropped her dress to the floor with a hushed slide and plop, making his mouth water. She was stark naked underneath.

“The support is built in,” she explained saucily.

He was too busy trying not to lose it to respond. His belt hit the floor with a thud at the same time that he slipped out of his shoes. Good balance was the only thing keeping him standing as he tore off his socks and dropped his pants, although the pole between his legs could have propped him up at that point. Quinn had never felt so hard or desperate in his entire life. Which was precisely why he left his underwear on. If she handled him bare right now, he’d never last long enough to get inside her.

With a growl, he shot forward and swung her into his arms. She giggled into his mouth as he kissed her and then squealed in delight when he threw back the covers and tumbled them both onto the bed.

“You’re so beautiful,” he chanted over and over again. “You don’t know what you’re doing to me.”

Even the floral scent of her hair stroked him from the inside out. She was a banquet, and he was ravenous. He sifted his hands through her locks, feeling each purple curl caress his fingertips and twine around his knuckles and wrists. Shifting his mouth up from her swollen lips, he kissed her dainty nose, her thick eyelashes, and the feminine curve of her ear. The hot spot over her pulse point was next while he swept his hands up and down from her shoulders to her fingertips.

Her nipples pouted for attention. She gasped and moaned when he attacked one and then the other with his starving mouth, sucking and licking and nipping while his fingers tweaked the other one. The dip between her breasts was fascinating, too. It carried her natural scent and the first drops of perspiration. After pecking a trail down to her bellybutton, he penetrated the indentation with the tip of his tongue and buried his face in her gently rounded tummy. His marauding hands stroked her from knee to thigh. By the gods, she was so soft and sweet. He’d never get enough of her.

Quinn cupped her breasts with hungry palms and gave them one more squeeze before all his attention centered on the treasure between her legs. He cocked an eyebrow in surprise as he explored new territory. Unlike New Earthling women, she wasn’t curly and coarse down below. Instead, she had very short, perfectly straight hairs that formed a pelt over her mons. When he ran his fingers through this novel down, he discovered it was as fine and soft as cat’s fur and just as thick. He felt her shiver.

“A natural purple,” he mused, which made her chuckle.

You can visit Allie's website/blog at http://allieritch.wordpress.com to learn more about her books, to test yourself with her weekly trivia, and much more.

I'm grateful to the artists who made these book covers pop. I had a lot of fun writing this series and hope readers will give my aliens a shot.

Allie - congratulations on your series. I know that you'll now immerse yourself in a new series because you can't let a great talent such as yours be silenced. I haven't read this series but am heading to Amazon as soon as I leave here. Thanks for sharing.

Cindy, you just made my day. Thank you!

They are fabulous covers, Allie! The colors grab your attention. And do do the titles. Alien Sex 101 is on my Kindle and I'm looking forward to reading it. :)

Thank you, Jessica. I hope you enjoy the book.