Interview with Cynthia Woolf, author of The Swords of Gregara-Honora


Hello, Cynthia! Welcome to Backward Momentum! It’s always wonderful to have a fellow science fiction romance author visit. Can you tell us about your latest release? 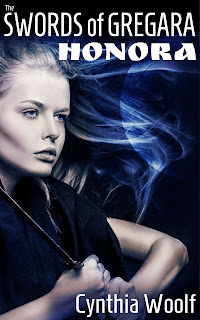 CW: My latest release is The Swords of Gregara – Honora.  Here is the blurb for the book:

They stole her love, her life and want to steal the secrets secured in her mind. Secrets that could topple world governments and decimate quadrant security forever.  Now she’s on an epic quest to find out why and make those responsible pay.

Honora Reyestat gave up everything to become a member of the esteemed Gregarian Guard.  No family, no friends, no connections--nothing that can ever be used against her.  Captured and enslaved, she's become a prized gladiator for her master.  Given the task of training a new slave, she recognizes a fellow Zolthor and the son of a tribal leader at that.  Her mission changes from discovery of the enemy's tactics and secrets to returning Joridan to his people.

Drawn to this fierce woman as no other, Joridan Dolana tries to explain she is wrong.  He's not Zolthor, he's Centauri.  He was raised on Centauri with his sister.  Faced with proof of a father's ultimate betrayal, he must choose between revenge and the protection of this woman who has sworn to never return his love.

What makes the setting for this story unique?

What was your inspiration for this story?

CW: I was watching Spartacus and wondered what if Spartacus was a woman and then what if she was also a spy.

Who is your favorite character from this book? Can you include an excerpt involving this character?

CW: My favorite character is Honora. Here is a small excerpt:

“Oww” a woman’s voice awash with pain reached his ears.

“You disappoint me, Honora.  You continue to try to escape me.  When will you learn?” asked a whiney voiced man.

When he woke again he was not alone but the man with the whip was gone.  Chained across the room from him, hung by her wrists, was a woman.  He could see the lash marks on her back.  Lash upon lash, new over old.  They obstructed the beautiful tattoo of a dragon on her back.  The blood hard to see within the red of the dragon.

Crawling to her he released her hands from the chains holding her up.  She collapsed in a heap on the floor.  He crawled back to his side of the room as darkness overtook him once more.

The dried blood on her back cracked with each movement, but she worked through the pain as she stretched.  Breathed deep and accepted the pain.  Her sword weighed heavier in her hand than usual.  More evidence of the lashing two nights ago.  She looked down at the unconscious man at her feet.  A new recruit.  A Zolthor,  like herself.  Another reason Perdor punished her for her attempted escape, her sixth try in as many months.

This last punishment was the worst.  Five lashes.  Not enough to incapacitate her but enough to make her remember.  Perdor wanted her to be able to train the new slave.  He wanted them to be a team, good enough to take on all contenders.  He’d be the only owner with two Zolthor fighting for him.  Not just one, but a team.  He was practically wetting himself in anticipation of the beras that he’ll win with a team of Zolthor fighters.

Again she looked down on the naked man.  Long brown lashes lay against his cheek.  A nice contrast to his golden blond hair.  What color eyes did they hide?  Blue?  Green?  Brown perhaps.  She’d find out soon enough.

He was a beautiful man.  Well formed.  Broad shoulders.  Trim waist.  Long muscular legs.  He looked like a warrior.  Would be a good fighter.  Maybe even a good lover as he appeared well endowed there as well.

He’d awakened from the drug induced sleep long enough to crawl over and release her from the chains.  For that she was grateful.  Her wrists didn’t hurt as much as usual because of him.  Using her blade was easier than it had been after her previous punishments.

Time to wake up the sleeping man and get him trained.  Time was short and she intended to make the most of it.  He would learn or he would die.

How long have you been writing with the hopes of publication?

CW: I started writing seriously in 1990.  That was the first time I joined RWA.  I had to let my membership lapse for a while and rejoined in 2001.

Why does science fiction romance appeal to you? Do you write in any other genres?

CW: I like science fiction romance because I can create my world any way I want it to be.  I’m only limited by my imagination.  And romance because I love romance fiction.  I also write historical western romance.  As a matter of fact, I call what I write ‘westerns in space’.

Can you describe your daily writing routine?

CW: I don’t have a “routine”.  I have terrible insomnia and because of that I can be working at all hours of the day and night.  I usually spend most of my time on promo with Twitter and Facebook.  Then I do email and last I write.  In reality I’m always writing, in my head, I just don’t get to put it down on paper as often as I would like.

CW: I enjoy reading historical romance.  Although I’m trying to get out of my comfort zone and try some erotica and some contemporary romance.

What is your favorite SFR title that you’ve read?

CW: My favorite is Star King by Susan Grant.  It was one of the books I read before I decided to put my dream that I had when I was 15 down on paper.  Thus Centauri Dawn was born.

CW: You can find me at my website, www.cynthiawoolf.com 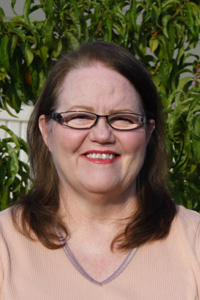 Cynthia Woolf was born in Denver, Colorado and raised in the mountains west of Golden. She spent her early years running wild around the mountain side with her friends.

Their closest neighbor was one quarter of a mile away, so her little brother was her playmate and her best friend. That fierce friendship lasted until his death in 2006.
Cynthia was and is an avid reader. Her mother was a librarian and brought new books home each week. This is where young Cynthia first got the storytelling bug. She wrote her first story at the age of ten. A romance about a little boy she liked at the time.

She worked her way through college and went to work full time straight after graduation and there was little time to write. Then in 1990 she and two friends started a round robin writing a story about pirates. She found that she missed the writing and kept on with other stories. In 1992 she joined Colorado Romance Writers and Romance Writers of America. Unfortunately, the loss of her job demanded she not renew her memberships and her writing stagnated for many years.

In 2001, she saw an ad in the paper for a writers conference being put on by CRW and decided she'd attend. One of her favorite authors, Catherine Coulter, was the keynote speaker. Cynthia was lucky enough to have a seat at Ms. Coulter's table at the luncheon and after talking with her, decided she needed to get back to her writing. She rejoined both CRW and RWA that day and hasn't looked back.
Cynthia credits her wonderfully supportive husband Jim and the great friends she's made at CRW for saving her sanity and allowing her to explore her creativity.

Thank you so much for having me here today. I know it's going to be lots of fun.

Hi, Cynthia. "Driven" is a good adjective for the main character.

Thanks for stopping by Allie.

You certainly are prolific!

Thanks for visiting our blog today, Cynthia. I've never had a membership to the RWA, just never had the money to do it, but I'll have to rethink that this year. It's been a long time coming.