You Have the Power: Guest Post by Author Cynthia Sax

I LOVE reading SciFi romances, especially series (like Jessica E. Subject’s delicious Mark of the Stars series). When I visit a world, I like to stay there for a while, meeting everyone. I wait and wait and wait for the next story in the series.

When I was a reader, that was all I would do – wait. And sometimes that next story never came. The series would hang, remaining unfinished. In TV terms, it would be cancelled. What could I do? I was only one reader. What power did little ol’ me have?

It turns out, I had TREMENDOUS power. I simply didn’t know it.

When I became a writer also (I’ll always be a reader first and foremost), I witnessed the power of the book lover first hand. I was at a writer’s meeting and a New York Times best selling writer brought in a fan email. A fan email. As in a single email from a single reader. She read it to a few of us, glowing. It was obvious that she cherished every word.

Why did she cherish every word? Because although many readers, unfortunately, talk about the books they don’t like, surprisingly few readers talk about the books they love. They certainly don’t send emails to their favorite writers. That means many writers hear negative feedback about their stories and that’s it. It is very challenging to write more stories in a series you think everyone hates.

Then there is the power readers have over sales. Because so few readers share the books they love, a two line post on a reader loop or Facebook or Twitter or taking 30 seconds to press the ‘Like’ button on the Amazon page can substantially increase sales of a book. Sales get publishers excited and excited publishers ask for more stories in a series. When my publishers ask me for stories, I write them.

Yes, it truly IS that simple.

Now that I know this, whenever I want to read another story in a series, I email the writer, I send a message to the reader loops I belong to recommending the story, I post links to the story on Facebook and Twitter, and I press the “Like” button on Amazon. This takes me ten minutes tops. Ten minutes to get more stories in a series I love. That’s a great use of my time!

We have the power to influence what stories are written. Use that power! 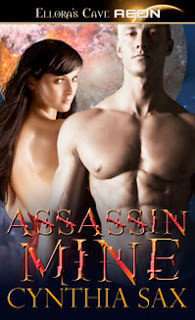 Buy Link for Assassin Mine:
http://www.jasminejade.com/p-10317-assassin-mine.aspx

Blurb for Assassin Mine:
Darius, a Balazoid assassin, lives a solitary life structured by rigid rules. Nothing is more forbidden than his sexual attraction to Sabria, a sultry human female. Yet she’s all he thinks about. One kiss, one touch, one heart-stopping encounter in a darkened alleyway isn’t enough to satisfy his unnatural obsession. Breaking every rule on both of their planets, Darius captures Sabria and takes her for his breeder.

Sabria takes one look at Darius and she knows she’ll have him…multiple times, in all sorts of positions. She’ll voyage to the end of the known universes to prove she’s the only breeder he’ll ever desire, blazing his notions of how a female should behave.

Because the only force fiercer than a Balazoid assassin is a woman’s lust.

Thanks for visiting Backward Momentum today, Cynthia! I agree. Reviews and emails from readers have some weight in stories I write. If they want the next book, I'm likely to write it. That's how I came to write the two stories after Celestial Seduction. Readers asked for more about the characters. :)

Thank you SO much for allowing me to crash at your online home today, Jessica. (gives you a big hug) I really appreciate it because you know I LOVE your stories!

Thanks for blogging with us today on Backward Momentum, Cynthia.

Thanks for blogging with us today on Backward Momentum, Cynthia.