Aliens: Mission of Peace or Invasion?

I was thinking of all of the science fiction movies that I have involving aliens the other day, and how many of them actually show aliens in a positive light. Some do, but most do not. Here's my list of movies:

Avatar - The people from Pandora are friendly, only wanting to protect their land. Those from Earth are the invaders here, and we didn't go there with the intentions of peace.

Chicken Little - This involves a full-out invasion. But not to take over, just to find little Kirby.

Contact - While the aliens in this movie contact us through mathematical messages, Ellie Arroway is the only one to have any personal contacts with the beings from outer space. I like to believe these extraterrestrials are peaceful.

The Day the Earth Stood Still - These aliens want to restore peace to Earth and believe killing off only the people do so.

I Am Number Four - The aliens come here to hide, but the bounty hunters after them will destroy anything that gets in their way. So, no invasion, but not necessarily peaceful either.

Independence Day - This one is a full-scale invasion, but the world actually unites to protect what is ours.

Indiana Jones and the Kingdom of the Crystal Skull - The aliens in this movie came here to teach us, but those who aren't worthy, do not survive.

Megamind - While two aliens come to Earth as babies, one grows up to be a superhero, and the other an evil villain. In this movie, they both discover their true destinies. No invasion.

Men In Black - In the first two movies (haven't seen third yet), both types of aliens are here, and the Men In Black keep them under control.

Monsters vs. Aliens - Definitely an invasion, and it is not the army who is sent to defeat them, but the monsters.

I have more, but they tend to include both types of aliens. 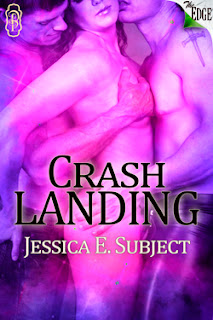 In my story Crash Landing, which releases tomorrow, Cael comes to Earth on a mission of peace. But what he experiences comes as a complete surprise.

As his ship plummets toward Earth, Cael believes his life to be over. His last ditch effort to save himself ends in a fiery crash. When he wakes up, he believes he’s entered the afterlife, but his surroundings indicate otherwise. He made it to Earth. But who saved him, and what do they want with him?

Crash Landing will be available from Decadent Publishing, Amazon, and All Romance eBooks later today, and at many other ebook retailers tomorrow. More information and buy links posted here.

Cael gripped the cushioned arms of the captain’s chair as his ship tumbled bow over stern. The console flashed a blinding red in front of him. Piercing alarms drilled into his mind and he lost focus. The seconds raced by as he plummeted toward Earth. He’d fucked up this mission of peace. Contact with his home planet had ended months ago. No one from Narien could save him now. His death was imminent.

The water below wouldn’t soften his landing. At its current speed, his ship would disintegrate on splashdown. The planet’s gravity pulled him down faster.

He coughed; the acrid scent of fried electronics stung his nose and the back of his throat. Please let my death be quick.

A rattling to the left caught his attention above all other noise. The handle on the cabin door shook. Freedom. It wasn’t his time to die, if he could get out.

The altimeter on the dashboard read six thousand meters, high enough to jump and land safely with his chute. Only to land in frigid water and die of exhaustion or hypothermia from treading without any hope of a rescue.

“Shit.” But he’d die if he stayed. He had to take the chance. Yanking off his safety harness, he pulled himself to standing and strained to reach the recess where his pack hung. Stretching up, he fingered the cloth strap. Not close enough to grab hold of it.

The ship jolted and flung him to the stern. He weaved his arm through the straps of the pack on his way past, dislodging it from the hook. Yes.

His triumph was short-lived as he flew starboard, smashing his shoulder against the wall. He groaned when an electrifying spasm shot down his arm to the tips of his fingers. The ship lurched again, and he tumbled back toward the console. He grabbed the door, his feet dangling in mid air. If he didn’t get out now, he’d forfeit any chance to survive.

The ship righted again. He planted his feet against the bottom of the door and twisted the crank. The latch snapped open, filling him with a sense of hope. Careful to keep at least one hand on the handle at all times, he slung the pack over his shoulders.

All set. Time to jump. Pushing off the floor, he slammed his uninjured shoulder against the door. It blew open and tore away from its hinges, lost to the sky.

Cael teetered on the edge before plunging out of his failing ship. Wind whipped all around him as he twisted to catch his bearing during freefall.

Glancing down, he spied crystal blue lake, much closer than he’d expected. Too close.

He jerked the cord on his chute–several hundred feet lower than he should have. At least. His feet skimmed the cold waves just as his chute caught the current and heaved him back into the air.

The ship splashed into the water beside him, disintegrating into millions of pieces. He raised his hands in front of his face as shrapnel flew at him. Tiny shards sliced into his arms and legs, but the extreme heat from the cloud of steam billowing up at him stung the most.

From the moment his toes touched down in the once frigid water, his skin sizzled. He screamed in agony. His death would have been quicker and less agonizing if he’d remained in the ship.

A hard piece of his spacecraft smashed down on his head, and he welcomed the darkness.

So, what do you think? When first contact happens, will they be peaceful, or ready to take over our planet?

Jessica Subject started writing to encourage her daughter to read. Now she writes to keep herself grounded. Although she reads many genres, she enjoys writing Science Fiction Romance the most and believes everyone in the universe deserves a happily ever after. She lives Southwestern Ontario, Canada with her husband and two kids and loves to hear from anyone who has enjoyed her stories.

Now that's what I call an exciting opening!

I'm of the opinion that if aliens do show up here, it's to clear the way for an interstellar freeway.

Thanks JC! I'm glad you enjoyed the excerpt. I would expect if a multitude of aliens showed up, it would not be good for us. But if only a few arrived, or they reached out to make contact, I definitely would hope for peace.

Very exciting opening! Hmmm. I guess it depends on which planet the aliens are from. I would assume that some planets might have friendly aliens, while others have evil ones. Sort of like the human race. :-) But then again, I don't know diddly about Sci Fi, but your book does sound good!

Remind me not to crash land on any planets. Sounds very painful.

I wonder if there are tiny martians right now wondering if Curiosity is friendly, right before its wheel crushes them to death.

Size is a critical, but highly variable factor that can impact survivalibility more than friendliness.

Alicia - Thanks so much! I like to believe there are both kinds out there, too. I hope it's the peaceful ones we meet though. :)

Liza - Well, they just found signs of water. One never knows. Yes, size would be a huge factor as well. Thanks! :)