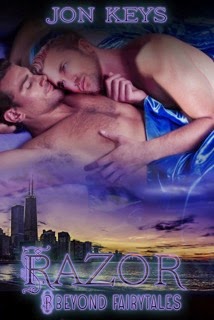 Blurb
James and Micah both face serious illness. Checking off things from their bucket lists, they find themselves drawn to a club like none they’d ever experienced. From the doorman’s leather kilt, to the waiter’s jockstrap uniform, they thought they had seen it all, when a tower of masculinity in leather and stainless steel walks onto the stage and turns the couples lives upside down and inside out.

Excerpt
Micah made the landing and stood watching James ascend. A few seconds later, he reached the top and looked around. They found themselves outside a door almost as dark as the night, set into a wall of cimmerian brick that disappeared into the gloom on either side.  The doorman standing beside it was equally striking. He stood taller than James's six feet, and wore only a black leather kilt and heavy boots that seemed to consume the lower part of his muscular legs. No one would dare challenge the man. His torso rippled in ways James had never seen before. His face was rugged, covered with a few days scruff trimmed precisely along his jawline. Before he could think of what they should do, the doorman spoke.
“Welcome to Razor. What’s your pleasure tonight?”
He stood speechless as the deep bass of the man’s voice resonated through the night. “The music. The music is wonderful. We caught it from a few blocks off and wanted to hear more.”
A smile emerged on the man’s face and changed him from executioner to guardian. “Of course, the music. You’ve found the right place. Just in time, too. Tonight is drawing to a close.”
He grasped the bronze door pull that was easily as long and thick as James's forearm and opened the massive door with little apparent effort. He motioned them into the portal with a wave of his hand. “Go. Enjoy yourself.”

Want to know more about Jon? Visit his links below.

Thanks so much DL! I love the cover and appreciate everyone who helped me share it!

You're welcome, Jon. It is a beautiful story too.