With the holidays upon us there are troves of books to curl up with by the fireplace. My paranormal romantic comedy goes great with mulled wine and cinnamon cookies. Part of Decadent Publishing’s 1Night Stand line, Frosty Relations features a young college graduate facing the complicated world of adulthood and confronting the frost mage she’s had a crush on for most of her life. Add some Christmas magic and Madame Eve’s renowned matchmaking service, and we’ve got the beginnings of an icy-hot love story. Those who’ve read my Halloween release Flirting with Fire already know Jack, this tale’s hunk. In keeping with the holiday spirit I’m giving away a $15 gift card. To enter, leave a comment here and drop your details in the Rafflecopter widget at the bottom of this post. [or replace with: at my website: TaraQuan.com/FrostyRelations]
Frosty Relations (A Witch’s Night Out, 2) 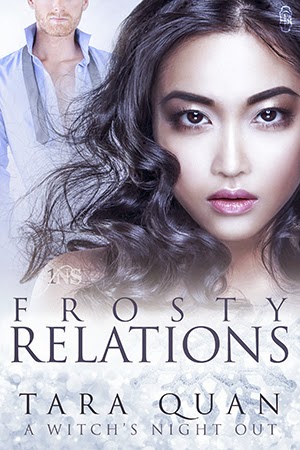 Attorney Jack Frost never understood why holidays did weird things to people. His secretary went on vacation, his best friend ditched their annual Aspen trip, and the law firm’s stubborn human resources assistant refuses his clerical support request. What’s a warlock to do on Christmas Eve but go on a 1-Night Stand? But when an oddly familiar empath shows up as his date, this ice mage has a hard time denying the magic of the winter solstice.

Faced with an anemic employment market and financial woes, college graduate and former witch Mina Mao lands an HR assistant job at Frost and Sons. Having spent her day saving Christmas from Frost Junior’s Grinch-like behavior, she accepts the gift of Madame Eve’s service and heads over to the Castillo Capital. When her date turns out to be her childhood crush and workplace nemesis, she braces herself for the sexiest icy ride of her life.
Genre: Paranormal Romantic Comedy, Interracial/Multicultural
Buy Links: Amazon | AllRomance | B&N | Decadent | GoodReads
Excerpt:
Jack reached over Mina’s head and tugged out the metal pins. As he placed them on the mantle beside her, one by one, he filled his lungs with the scent of cinnamon and cloves floating off her hair.
She sighed. “You have no idea what I went through for that up-do.”
“I never liked it when you tied your hair.” A few more pulls dislodged the coiled bun. The braid unwound into a long queue that reached her ribcage. Placing one hand above her head on the pillar, he reached around her waist and tugged the elastic free.
She stepped toward him, her head tilting up. Their breaths mingled, her midnight eyes hooded by a dark fan of lowered lashes. “You never seemed to give a damn about how I looked.”
“For an empath, you’re not much good at reading minds. I almost grabbed you by the ponytail one day with every intention of freezing off the godawful scrunchie. Those things went out of style in the nineties.” She remained motionless as he worked his fingers through the silken strands, unraveling the thick mane until it fanned over her back and surrounded her delicate shoulders. He wanted to see her like this, without a single stitch on her. “There. Much better.”
Her brows furrowed. “You never considered kissing me before. What changed?”
Hell if he knew. 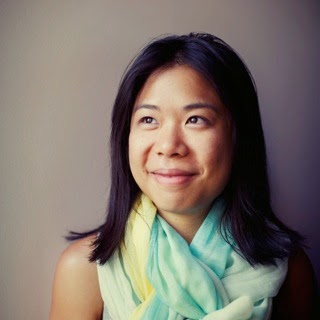 About Tara Quan
Globetrotter, lover of languages, and romance author, Tara Quan has an addiction for crafting tales with a pinch of spice and a smidgen of kink. Inspired by her travels, Tara enjoys tossing her kick-ass heroines and alpha males into exotic contemporary locales, paranormal worlds, and post-apocalyptic futures. Her characters, armed with magical powers or conventional weapons, are guaranteed a suspenseful and sensual ride, as well as their own happily ever after. Learn more at www.taraquan.com
Website | Facebook | Twitter | Google+ | Goodreads | Pinterest | Amazon

Thanks for having me over!!