It’s been said that hate isn’t the opposite of love. Hate has too much passion, too much heat to be. If you’re looking for the opposite of love, you have to turn toward apathy. But when you’re in the middle of a good old-fashioned feud, love might just be the furthest thing on your mind.

Then again, if there’s a history, if it was love that drove you to hate, love might not be as far away as one might hope. And that’s the spot one of my heroes, Ben, finds himself in with my newest book, Shared Objectives.

Ben and Lisa had been in a relationship two years ago. One that ended when he found out she is a geneticist working for the government. Being a genetically altered soldier who is fighting for a rebel organization, she is clearly Ben’s enemy. Which, in his mind, meant she’d been using him.

And when they’re forced to reunite two years later, he’s still carrying that hatred. But he’s going to need more than anger to keep their old chemistry from affecting him, especially when one of his friends, Dixie, starts having feelings for Lisa. He’ll have to find a way to make peace with the past or he stands to lose more than just his lover this time. 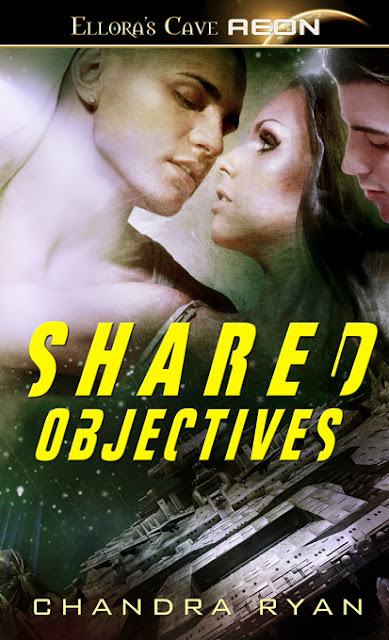 When Lisa and her son are rescued from a military prison, one look at the genetically altered mercenary who carries her to freedom puts some racy ideas into her head. Dixie is strong, handsome and kind, an unfamiliar combination. Her job as a government geneticist usually sends men running, not rushing to her aid.

Unfortunately Dixie isn’t alone. Lisa’s ex, Ben, is another member of the Coalition, the band of rebels fighting against the government that locked up Lisa. After their split two years ago, she never thought she’d have to face his scorn again. But now she has to work with him without giving in to old temptations. Or so she thinks.

The men need her for her genetics skills. When they discover they’re both attracted to her, they have to find a way to share or risk destroying their friendship. And Lisa finds that two sets of sexy hands all over her body are hotter than one.

Inside Scoop: This ménage features a kiss between two men that sparks a plan to steal a woman’s heart.

The man sitting at the computer terminals turned to face her for the first time and Lisa’s blood went cold. At least now she knew who had her. She’d been taken by the Coalition. She’d never be able to forget his face or who he worked for.

Her grip on Nate tightened as she fought back a wave of fear. This was the one man who had a claim on Nate. He could take her baby from her and she couldn’t do anything to stop him. Laws didn’t apply to those who fought to bring down the lawmakers. “Hello, Ben.” Her voice was soft as she said his name. “Long time no see.”

Ben smirked at her. “So you managed to get knocked up by one of us, then?”

His voice held condescension even over the static of the microphone. But his arrogance actually helped her relax. If he didn’t know Nate belonged to him, he wouldn’t fight her for their child. “What can I say? Looks as though I was just a whore for the government after all.” She managed to glare at him as she repeated the final words he’d yelled at her the last time they’d been together. Two years was a long time, but it felt as if mere seconds had passed as she stared at him.

He just shrugged and then reached into one of his cargo pant pockets to pull out a sealed syringe package. “I tried to warn you about their retirement plan.” He passed her the medicine and then returned to his station.

“Thank you.” The words had to be forced through gritted teeth but she still managed to get them out.

His words hurt almost as much as watching her son waste away in her arms. She’d loved him once. And she’d been naïve enough to believe the words he’d whispered against her skin. Once he’d found out who she worked for, though, his words hadn’t been nearly so nice or inviting. “Yeah, you made your feelings about me clear the last time we spoke.” She used the excuse of taking the injection out of the package to not have to look at him. Thankfully, as she injected the chemical into her baby, she could almost see his health improve. “I’m trying to be gracious for the sake of my son.”

If you want to know more, you can find Shared Objectives on Amazon, Ellora’s Cave, or on my website: www.ChandraRyan.com

Thank you so much for having me on your blog!

This sounds very good. Maybe I should stop writing and just read everyone else's books....

Nope. I'll just need to figure out how to stretch time.

You're most welcome, Chandra! It's a pleasure to have you back. :)

Liza, I want to do that, too, many days. LOL