I will never forget the moment I sat on my stairs in my Executive rental house in Overland Park, Kansas and told my mother I would be moving her grandchildren to Turkey.


It was less of a shock I think because we had just spent 2 years in Hiroshima, and almost a year in Kansas (sort of like a foreign country). My 3rd kid had been born in Japan and my mom had travelled to be with us that summer.


But still…the inevitable “haven’t you SEEN ‘Midnight Express?’ “cries of horror coupled with the “will you have to go around with your hair and face covered?” and the ever popular “do they have running water there?” moments were endured, over come, the “pre trip” (ostensibly to find housing) was achieved, we packed up our 3 kids ages 10-7-3 and headed out on our new adventure.


It was a rocky start. We hit Istanbul at the height of the heat—August, when all logical residents who can afford it are on the coasts, and avoiding the soul-choking heat and exhaust and other smells of an ancient city located in a 2nd world country.  The flat we rented sight unseen (because we didn’t realize one had to bribe the estate agents to get the one we wanted---RED FLAG) was hotter than the 7th level of hell. There was no food in the fridge, no milk or juice for the travel shattered kids, and I sat down and told my spouse I was never sleeping a second in that (admittedly really love flat) and to book my ticket straight back to Michigan…OR ELSE.


Well, suffice it to say I fell in absolute love with the city, and the country and I think it was my absolute rejection of it for the first couple of weeks (that I spent sleeping with my luggage still packed, no lie) actually was the perfect framing of an ex-pats experience with one of the most beautiful, fascinating, frustrating, awful, amazing, gorgeous, thrilling and terrible cities in the world.


Istanbul is nothing but chock full of history and I was lucky to befriend a Turkish woman who owns and runs a boutique travel agency—who was a closet historian. We explored nooks and crannies of the city and out into the country that I never would have seen without her. I had a basic working knowledge of “Constantinople” then “Istanbul” that was a little beyond the catchy They Might Be Giants song. But nothing prepared me for the onslaught of amazing people that I met in my travels.  The Turks are fiercely proud, somewhat divided ethnically, like many countries, but among the most hospitable people I’ve ever met (and I’ve been in a few countries so I can say this).


Turkey is no more represented by “Midnight Express” Than America is by “Deliverance.”  Trust me.  It is a secular nation, run by a parliament and prime minister that is no more corrupt than any other government and I am not only not required to “go around covered” it is discouraged by the government itself unless you religion requires it.  And the water runs, although we did purchase giant bottles of drinking water as the electrical grid suffered under the weight of nearly 14 million people and was known to go out, which would cause water treatment plants to become less reliable.


I had my down moments. One featuring being “arrested” by some eager Gendarme (sort of the “state police”) by accident. Some of them potentially earth shattering. But overall, I loved it. And when it came to writing a series that had at its core a “magical dating service” based in Las Vegas (another of my fav cities in the universe) I automatically said: “Madame Eve must have an Istanbul outpost.” And hence the Turkish Delights series was born.


I wrote 3 of the 1NightStand stories then loved the blended American/Turkish Deniz family so much I gave them a prequel and a final, slightly harrowing novella in which a beloved member of the group is restored to them—which has its own complications. 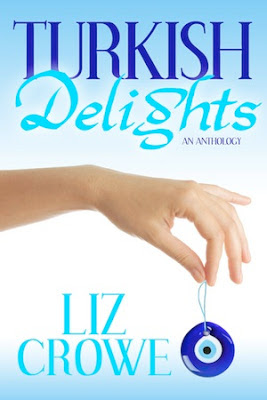 A young American woman comes face to face with her destiny in Istanbul in the 1960's and an epic dynasty is born.

When Vivian Kinkaid turns around in her college classroom and makes eye contact with a man who was once her forbidden childhood friend, her life is changed forever.

A sweeping saga of family, love, loss and recovery—The Turkish Delights series begins with a special sort of magic. Then, Madame Eve works her miracles for the Deniz family, but even she can’t overcome the harsh realities that force this Turkish/American family to deal with tragedy when one of their own is ripped from their close-knit circle.

“The Turks” opens with a best-selling classic romance for the ages then ends with a thrilling novella that brings all the players back together. Set in Istanbul, Las Vegas, and Southern California, The Turkish Delights series has it all—heat, heart, intrigue and a deep, family connection that transcends all barriers.

3/10 The final stop: www.decadentpublishing.blogspot.com is a contest that consists of 5 questions plus a bonus round. All answers can be found in various posts throughout the tour.
The commenter who gets the most answers correct AND leaves an email in their comment wins:
1 signed print copy of Turkish Delights
$50 Amazon gift card
and if they get the BONUS question too: a Beer Wench tee shirt from Liz' brewery.

Thanks for stopping by, Liz. Now how do I con you out of one of those Beer Wench tees?
Posted by D L Jackson at 12:30 AM

Wow, I can't imagine moving so far away with my family. Just the thought of moving across the country scares me.

All the best with your tour!

thanks for having me!

Good luck with your tour. I always love to hear stories about living abroad. Thanks for sharing.