Hello!! Today is an exciting day for me, as it is the one-year book birthday for the All Romance eBooks bestseller, Unknown Futures, my third story to be published. While this story can be read on its own, Unknown Futures also continues the story of Carrie and Frey from Celestial Seduction. 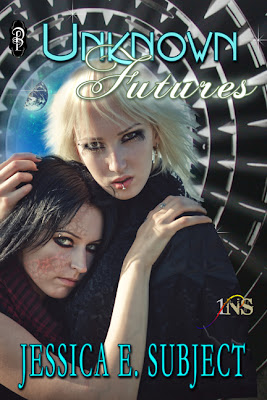 Attacked as a young adult, Jewel is left scarred and alone. She applies to the 1 Night Stand service, believing no one can see past her appearance to love her. But she doesn’t expect to be sent to a space station where her date could be any number of unusual alien species.

Flavia left everything behind to be one of five humans working for the Space Service space station. Extremely homesick, she is excited to learn she will be a guide to a woman from Earth visiting the station for a couple days. She is immediately drawn to the petite woman, seeing past her scars to her true inner beauty, stirring unforeseen desires.

Unfortunately, Jewel is there for a date which Flavia hasn’t been told about. Can she contain her lust and simply show her a good time? Or will she let her desire lead them into an unknown future?

V stared across the concourse, trying to spot her charges. She’d been told to expect three people through the portal from Earth, two Terran females and a Ginnunian male who might be disguised as a Terran. How would he look? The blue-skinned species had never needed to hide their identity on the space station. Would he still show a hint of his natural color, or would he resemble his traveling mates?

They’d all be easy to spot. V was only one of five people from Earth who worked at Space Service Headquarters. Every day, she saw thousands of Phanties, a species with large ears and a trunk like an elephant; Pillites, who reminded her of a giant pill bug; Goopers, blue blobs with eight short tentacles as feet, and many other species from around the universe. But Terrans could only make it out to the space station—perched on the far edge of the Milky Way from their home world—using a portal the government deemed classified.

She’d never dreamed of working off-planet back when she waitressed for a quaint Italian restaurant in New York while putting herself through grad school. But one unusually calm night, she’d served a man who’d reminded her of a character from Men in Black. He’d appeared surprised when she’d understood his order—spoken in German.

While her other customers languished, he’d engaged her in friendly conversation. Charmed by his witty repartee, she’d revealed she spoke five different languages and was working two jobs to put herself through school. Along with a generous tip, he’d left his card—containing only his name and number—with If you’re looking for a job that’s out of this world, call me written on the back. Thinking he was some kind of quack, she’d tossed the card in the trash before greeting a new table of customers.

He returned the next night and every evening for a week until she consented to sit down to listen to his job offer. Six months later, after completing rigorous training, she’d walked through the portal to serve as a concierge for the space station’s interstellar hotel. She hadn’t returned to Earth since then, her position so top secret she’d been unable to so much as tell her boss why she’d quit with no notice. Other than spending a few familiar holidays with her fellow Terrans, she almost never crossed paths with anyone from home.

She continued her education as well, overwhelmed and fascinated by ancient space history consisting of much more information than that of Earth. Still, she missed her own kind. Terrans were seen as inferior to those from other planets, governed by cowards who hid the idea of other life in space, yet took full advantage of the technology. Thankfully, no one held her accountable for Earth’s deficiencies.

She was drawn back to the present as the crowd parted in front of her, like the Red Sea to reveal her charges. They walked along with the other new arrivals, oblivious to the multitude of curious looks they received. The blue, lanky Ginnunian male led his very pregnant terran wife toward her. Peering past the pair, V caught a glimpse of a dark-haired woman tucked closely behind them before the crowd closed in once again, grunting, squeaking, and clicking in communication.

She waved to get their attention, thankful her charges had arrived without incident. “Hi, I’m Flavia, but you can call me V. That’s what everyone here calls me.” Because no member of any other species on the station had been able to pronounce her name without it sounding vulgar in his or her language.

The Ginnunian stepped forward and surprised her by reaching out to shake her hand—not a custom for his people. “Hello, I’m Frey, and this is my wife, Carrie.”

She shook his hand and then his wife’s, trying to hold in her excitement at meeting someone from home.

Frey moved to the side, revealing the petite woman behind him. “And this is Jewel.”

V squealed. Unable to hide her exhilaration any longer, she wrapped her arms around Jewel. Not only was she from Earth, but she looked to be only a couple years younger than her. All the Terrans on-station were her parents’ age. For once, her unwavering loneliness would ebb, at least for a few days.

But her hug wasn’t returned, only met with a gasp. V stepped back. “I’m sorry, did I hurt you?”

“I think she’s a little self-conscious about her scars,” Frey said.

V winced. Why did he have to mention them? Sure, she’d noticed, but she had friends with fins, feathers, and elephant ears. A few scars wouldn’t stop her from being social. Was that why she’d been asked to entertain Jewel during her stay?

Unknown Futures can be found in the print anthology Intergalactic Heat.

Leave a comment below for your chance to WIN an Unknown Futures magnet & other swag. Winner will be drawn January 8, 2013. Good luck!

Giveaway ends January 31, 2013.
See the giveaway details at Goodreads.
Enter to win
Posted by Jessica E. Subject at 6:00 AM

Congratulations Jessica :-) It's hard to believe a year has flown by, and you just keep gaining momentum!

Keep writing girl, you have such exquisite story crafting!
(save the swag prize for readers, I'm just stopping by to return some of the awesome support you give me and so many others.

Thanks so much, Kali! I know! It truly is hard to believe. I can't wait to see what this year brings. :)