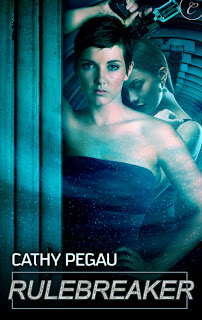 At this point, I haven’t written alien species as the main characters or hero/heroine in my science fiction romance. Not that I have anything against them. Some of my best friends are from space. No wait, that’s spacey. Never mind. Anyway, all of the inhabitants of my worlds are plain ol’ human beings. Here are some reasons why I stick to the species I know best (even if the men make me shake my head in wonder at times : ) And reasons why maybe I should give the green guys a try ; )

1.      Known biology. For the most part, I know how humans function. By using them, I don’t have to worry about all that messy science : P Kidding. I love biology. Creating a new species has its appeal; I just haven’t had the inspiration to do so.

On the other hand….There are GOBS of configurations of body parts and subsequent positionings that could make a story…um…interesting. Create your own species? Hmm. Give them sensitive areas or erogenous zones that aren’t typical or expected? Hmmm…

2.      What are the chances of humanoid life out there? I’m guessing pretty low. For the sake of my novels, the species we’ve encountered aren’t more intelligent than animals, let alone candidates for potential mates.

On the other hand…The point of speculative fiction is to, in fact, speculate! What if there are species just waiting for us to reach a certain maturity? Or on their way and we have yet to invent the technology to detect them? There are many reasons why we haven’t bumped into aliens at this point, but that doesn’t mean we won’t. Just because we’re barely out of our own cosmic backyard doesn’t mean we’re alone in the neighborhood.

3.      The Human Condition. I’m no expert in this field (or any other, for that matter) but like most writers I’m fascinated by human interaction. Why are these two people attracted to each other? What is it about the other person that makes them rail and shake their fists while wanting to kiss them? How can the characters get over their differences (some of which are so opposing they’re often enemies in the beginning of romances) to come together (heheh. “come together” heheh. Sorry. Carry on…)

On the other hand…What better way to explore our humanity than through the eyes (or whatever ocular mechanism) of an alien species? And if there is a way for two characters to be any more different and possibly at odds than by being different species, I’d like to know what it is.

So I guess there’s no real reason for me NOT to take a stab at an alien romance. But I’ll tell you right now, I think I will be drawing the line at anything that includes tentacles. Baby steps, people. Baby steps. 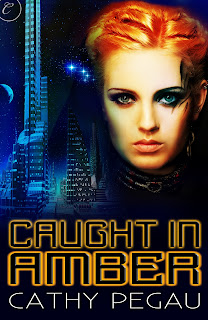 Cathy Pegau can’t seem to write anything that doesn’t include some sort of foray into a different reality. Her debut novel, Rulebreaker, came out in August 2011. Her second novel from Carina Press, Caught in Amber, releases January 28, 2013. The third book set on the mining colony of Nevarro, Deep Deception, comes out in May 2013.

Pre-order Caught in Amber at Amazon
Check out it out at Carina Press
Find Cathy at her website.
Or drop her a note on Twitter or Facebook

You give us some very good pros and cons, Cathy. Like you, I haven't delved into creating an alien species as yet, though some would say my human characters are plenty weird.

I haven't created species yet either, or not humanoid species, anyway. Animals and plants, yes. I like the idea of manipulated humans better than alien races, though. Clones, bio-cybernetics, mind-readers... The lengths humans will go to to improve themselves and each other is fascinating. Gene manipulation for perfect health and beauty, cybernetic strength, body modifications like four arms instead of two arms and two legs (yes, those are LMB's Quaddies)...

Thank you for stopping by, Diane and Jenna! I started writing humanoid style aliens. Though I do have some that are non-humanoid, but not main characters. I am now venturing into clones, and want to try cybernetic characters as well. :)

I've actually been mulling a "first contact" sort of thing. Not *quite* sure what it'll be like at this point. So many options ;)

Jenna, the things you describe take as much or more consideration in some cases than creating a new species. They sound intriguing!

Jessica, I like the idea of clones and cybernetics!

I've gone the alien hero route and I don't think it's that far-fetched to imagine we might find aliens similar to ourselves. My inspirations were Star Trek and Babylon 5 -- humanoids galore! But also the reality of convergent evolution -- that regardless of location or species, biological necessity will cause similar traits to emerge -- such as wings in both birds and mammals (bats).

One might also argue that if there's a God, why wouldn't God create more than one earth-type world? As in Babylon 5, the evolution of different races was manipulated genetically by a superior, godlike race. Or you could opt for some kind of variation on the idea that intelligent life on different planets actually has one origin (as in Star Trek, I think it was one of the TNG episodes).

I had a blast inventing the Glin, Tikati and Finders for my Stellarnet Series. The Glin are humanoid, but the Tikati are insectoid and the finders are avian (but featherless, similar to the way we humans have lost most of our primate hair). The Glin are the love interests. I will say, it would have been SO much easier if they'd been human, but not half as fun.

Oh Cathy! A first contact story would be so awesome! I say Go For It! :)

J.L. - It is a lot of fun to create all kinds of new species whether humanoid or not. And whether there is life like us out there, well, we won't know until we make contact. Until then, it's great to speculate. :)

>I think I will be drawing the line at anything that includes tentacles.

J.L., I don't think I could get anywhere near as creative as you in the alien species department :)

Jessica, it's brewing in the back of my head. In conjunction with another idea my editor is asking me to write ;)

Heather, the tentacle thing....I just don't think I can go there ; P