You are still my hero, baby. 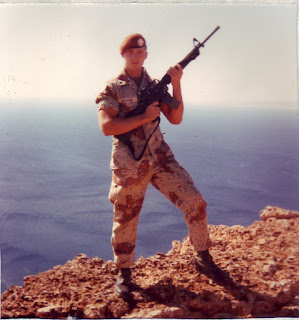 Um, so it's my 22nd anniversary and I'm frantically digging for a receipe to make something special tonight. In the mean time, I want to share a little story. Have you ever wondered why I love writing military romance so much? Yes some because I was a woman in uniform, but mostly because I met the love of my life in the Army.

22 years ago my husband, Paul was deploying to Egypt during the Gulf War. I was pregnant, in the Army, and had orders to deploy 45 days after I gave birth. It was one of the most stressful times of my life. The night before he left, we eloped. We'd wanted to wait until the baby was born, but plans change and as the military teaches you, improvise, adapt and overcome. So we did.

We grabbed our marriage license at lunch and after final formation, made a run for the justice of the peace with our best friends Pamela and Derek. I didn't have flowers. I didn't have a dress. We didn't even have rings. But what we did have was love, and we vowed to make it work.

My first letter came with a roll of film, the pictures I've saved along with that letter. Paul has never been a romantic, it's just not in his genetics, but that letter, those photos, kept me warm while he was gone. He knew how badly I needed to see him and hear from him. They didn't have computers, they didn't have Skype. Those letters home kept me sane, and would later help me to understand what my daughter-in-law was going through while my son was deployed to Afghanistan.

Paul came home with the advance party, days before I was to have my son. His first sargeant's wife was a pistol. The woman said jump and shit happened. Before I hadn't been sure he'd make it back for the birth of our son. There was no pomp and circumstance, no crowds of family, only a few, waiting out in the parking lot as the five ton pulled up to the barracks to bring them back from the armory. I remember seeing him in the dim light of the streetlamps as he hopped out of the back and walked toward me. For a moment, we felt like strangers, and then the look in his eyes, the smile on his face. I launched across the parking lot as fast as a woman nine months along, carrying a ten pound baby, could move. He swept me off my feet in a hug and swung me around like I was no heavier than a feather.

I know how lucky I am to have my hero come home to me. Everyday, I count my blessings and once a year, I celebrate. Through thick and thin, richer and poorer, we've endured to see our son's grow into warriors and find ladies of their own. And when I see the tears in their ladie's eyes as they get off the bus, or see them for the first time in months, I privately relive a moment when I felt the same way. It is moments like that, I want to capture with words.

To this day, Paul is still my hero. Here's a song that makes me think of him.

Congratulations to you and your husband on your 22nd anniversary! And many more!

This was beautiful! Made me tear up! Thanks for sharing such a lovely post...and happy anniversary :-)