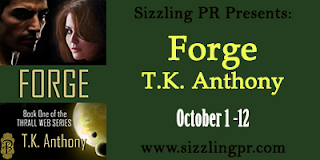 Thanks so much for having me on your blog, Jessica. I just want to let everyone know that a comment here will enter you into today’s drawing for another Decadent Publishing title in the ebook format of your choice. Also, if you follow me on Twitter, &/or friend me on Facebook—mentioning “Forge blogtour”—you’ll also be entered into a drawing on October 13th (the day after the end of my blog tour), for a $20 Amazon gift certificate. If you both friend and follow, you’ll be entered twice. Good luck, everyone!

Also, I love to hear from readers! My online home is www.scotianrealm.com. I can also be found on Twitter: @TK_Anthony_ and  Facebook: https://www.facebook.com/tk.anthony.9. Or, send me an email at tesskanthony@gmail.com.

So, TK, tell us about your new release.

TKA: “FORGE” is the first book in the Thrall Web series, combining epic SF with sweet romance. It’s also my debut novel...so I’m just delighted to be here chatting with you about it!

It's great to have you here. Describe the heroine in three words.

TKA: I can do that from the hero’s perspective. At first, Keir* isn’t sure whether she’s real, or the remnant of the visions induced by the same hallucinogen that stripped his memory and left him nameless. So all he’s certain of is...she’s beautiful, with dark hair and amber eyes. When he finally meets Nica, he adds another adjective: Unattainable, because of the difference in their talents and stations. But then they’re thrown together to rescue her father, and he discovers the qualities that count. Nica is courageous, compassionate, and capable. Extremely.

*He starts out as “Tazhret”... “nameless” in the Tormin tongue.

What traits does the hero possess that makes the heroine swoon?

TKA: You mean besides his rugged good looks? Nica’s a powerful healer-adept, and she’s drawn to Keir’s energy from the moment she heals him. She soon discovers that Keir is a man of dogged endurance and courage, quick intelligence, wry sense of humor...and a boundless capacity for unconditional love. Most of the men who’ve courted her were interested in what marriage to her could do for them. Keir is all about standing with her against dire odds—hunted for treason while searching for her captured father—with no expectations of anything other than the honorable friendship she would be able to return. Oh, and almost certain death.

Oh, I'm swooning, too. What was your inspiration for this story?

TKA: That’s a hard question to answer. Nothing. Everything. Underlying themes of freedom, human dignity, identity, unconditional and sacrificial love, the meaning and power of suffering and endurance, came from a lifetime of reading...and the real experience of taking on night nursing duties for my 84-year-old mother when she broke her leg, and wasn’t expected to ever get back on her feet again. Mom’s quiet heroism in the face of her own struggle definitely showed up in “Forge.” So did my own anxiety. I’m pretty sure that what happened to Nica’s father immediately after his capture was influenced by the case of bronchitis and pleurisy I had while writing the scene. But the actual characters and what happened to them...they told the story to me themselves. At times, it seemed more like channeling than writing.

Who is your favorite character from this book? Can you give us an excerpt?

TKA: I like them all...this is like asking me to name my favorite niece or nephew! (Well, I don’t like the villain, but I do feel sorry for her. She learned the lessons of her culture all too well.) But since we’ve already talked about Keir and Nica, I think I’d like to introduce Nica’s father, Col, who’s just acquired Tazhret from his abusive master...even though he has problems of his own.

Col kept the team to a deliberate, unhurried pace on the long road through the Dry Lands. As he sat up behind his easy-gaited horses, watching their ears twitch to insects and their own equine thoughts, Col considered his slow travel through the cities and settlements of Forge over the past six standard months.

The lid of civility and law sat uneasily on a simmering stew of distrust, dislike, and hostility among Scotians, Xerni, and Tormins. The ill will was worse now than at any time since Forge’s founding—a failure of its very purpose, to foster cooperation among the three peoples. And if Forge failed, the Realm would fall…. Col bit his lip. If Forge failed, the failure was his own.

Just over sixty standard years before, the Scotian Realm had discovered a world wealthy in ores, gems, timber, and soil. Compounding its worth, the planet sat at the center of an unsuspected wormhole hub—a natural crossroads among the three peoples, connecting the Xern Cluster, the Tormin Accord, and the Realm. Instead of keeping a jealous guard on so rare a prize, the Scotian high king had seized the opportunity to build the Realm’s alliances with his wary neighbors. He’d established Forge as a protectorate of the Realm, governed under a constitution negotiated with the extees, and opened the new colony to Xern and Tormin immigrants.

The son of founding colonists, born and bred on Forge, Col was one of the few who knew the hope of alliance was High King Conall’s cast against a day of dire need. Col had been a youth of fourteen when his father Gabriel had shared with him the late high king’s Seeing of an enemy who would enslave all the three peoples—Scotians, Xerni, and Tormins. Almost forty years later, the vision still had the power to chill Col’s soul. But precognition, the rarest of all talents, was also the most fickle. The high king’s vision had precious little information about the enemy, except for the knowledge that they would prevail unless the three peoples stood together against their common foe. Now, we’re more likely to turn on each other. All that’s needed is a flashpoint to set off the fire—such as Tazhret.

Tazhret. Nameless. A Scotian without any record in the identity archives was rare—and usually a criminal. And what crimes had “Tazhret” committed to drive him to erase his name from the system?

Col had scanned the identbead before signing the transference contract and read Tazhret’s brief record—including the notation “scoot-induced amnesia.” But his odd intuition dismissed—for reasons it wasn’t sharing with Col—the notion of the izzy wiping his identity with black market assistance. Annoyed with his inconvenient talent, Col still rejected the scenario on the basis of common sense. If Tazhret had paid to have his old name erased, why hadn’t he paid them to create a new, blameless identity? Maybe he couldn’t afford it? Scoot’s an expensive habit, after all.

Whatever his past, if the Scotians learned of Tazhret’s abused condition, Forge’s simmering hostility could boil over into outright violence. The counter-claim—Tazhret was a crimserv who had killed an extee izzy—would make for an even uglier stew.

Civil riots. Martial law. Sword-rattling communiqués from the extee governments. Heated responses from the Scotian Realm. If—when—the nameless foe appeared, they would find enmity among the three peoples instead of alliance. The vision of chaos and destruction drove Col’s grim resolve—Not on my watch.

He had a sudden, inexplicable feeling he was hauling the future of the three peoples in the back of his wagon. He shook his head at the fancy. Ridiculous. Still, he clicked his tongue at his team, hands moving on the reins. The willing horses lengthened their stride in a ground-covering pace.

What are you working on now?

TKA: I’m editing the sequel to “Forge”—working title, “Web of Destiny.” And I’m halfway through the first draft of a short story set in an entirely different universe.

Are you a plotter or a pantser?

TKA: A lot of pantser with a little plotter. “Forge” was a wild ride of a pantser, until I began to see where the characters were taking me. Then I roughed out an outline, so I could capture some of the key scenes that came to me almost whole cloth, and pick out the stepping stones between them. But in the midst of actual writing, I sometimes found the characters overruling what I thought would happen. I always trusted my characters, and they never steered me wrong.

TKA: On my website: www.scotianrealm.com (you can purchase “Forge” on the Buy page, or go direct to Decadent, Amazon, Smashwords, Coffee Time Romance....)
Find me on Facebook:  https://www.facebook.com/tk.anthony.90
Or on Twitter:  @TK_Anthony_
Or, send me an email: tesskanthony@gmail.com 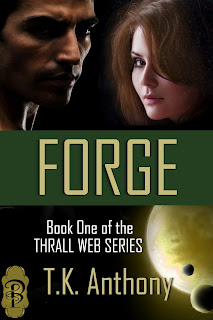 
Warned by a Seeing…

The high king of the Scotian Realm expects the arrival of an enemy, a race of psychic predators bent on galactic conquest. The Realm’s one hope is alliance with the neighboring star domains in defense of a shared colony, Forge.

Mindblind, amnesic, Tazhret lives out his drug-induced visions of servitude on Forge. He wants to believe the beautiful woman with the nut-brown hair who whispers reassurances to his harrowed heart: “You have a name.” But is she even real? Or just one bright thread in his dark dreams?

Tazhret’s destiny leads him to freedom and the woman he yearns for—and to a desperate struggle against the enemy.

Tazhret can save Forge, and the clan of his beloved. But only at the cost of all he has hoped for:
his name, his freedom, and his love for the woman with the nut-brown hair…

Warped in childhood by too much reading, T.K. Anthony made her living in the world of words, briefly on Capitol Hill as a press secretary before moving on to Corporate America in business communications and human resources.

She grew up in Pennsylvania, has lived in Illinois, Virginia, Upstate and Central New York, and Massachusetts, and has seen much of the United States by road trip, visiting a whole raft of cousins. Travel outside the US includes Scotland, England, Italy, France, and Belgium. With her travel bag packed, she now resides in Texas with her husband, two cats (Pip and Taz are close collaborators in her writing, and keep her keyboard furry), and all the people in her head who talk to her.

She loves to talk to other people, too–so leave a comment, or send her an email at tesskanthony@gmail.com.

a Rafflecopter giveaway
Posted by Jessica E. Subject at 4:00 AM

Welcome to Backward Momentum, TK. I have to tell you I finished Forge the other night. An interesting concept and I like the touches of Terran familiarity that you scattered throughout.