Beneath the Starry Sky is FREE!

Hey! I just wanted to let you all know that BENEATH THE STARRY SKY will be FREE on all Amazon Kindle sites starting tomorrow, June 22, until Tuesday June 26, 2012. This story is a contemporary romance, not sci-fi romance, but it does have a hero who is a former sci-fi television star, and characters who make guest appearances in some of my other stories. 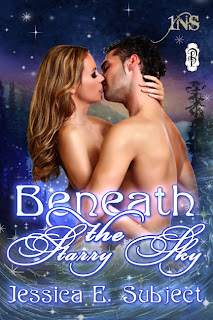 Beneath the Starry Sky:

Left at the altar with bald patches on her head and her self-confidence stripped away, Tamara Johnson must pick up the pieces of her life and face her Alopecia Areata, the autoimmune disease causing her hair to fall out. She is convinced no man will date a bald woman and arranges a one-night stand through Madame Evangeline’s popular service, 1Night Stand. With her new wig held firmly in place, Tamara arrives at the Castillo Hotel in Las Vegas for a night of passion and pleasure. Anything more than one night would mean exposing her bald head, and she will never do that to any man again.

Running into the Castillo Hotel, away from the paparazzi constantly at his heels, Josh Summers wants to spend his next few days locked away from the flashing lights and screaming fans. When he finds an incredibly sexy woman lying on his hotel room bed in nothing but lingerie, he thinks management has made a mistake. Leaving her behind, he heads for the lobby to get the situation rectified. But an unexpected text from Madame Evangeline sends him back to his room. Though unsure whether the woman on the bed is really his perfect match or just another fan believing him to be like his character on television, he knows he must find out, even if it means he must risk telling her his own secrets. If Tamara can handle his imperfections, she just might be his ideal woman.

You can download it for FREE starting tomorrow here:


Beneath the Starry Sky excerpt:

Shit! I can’t go anywhere without someone getting out their camera. He raced with Tamara in tow, trying to keep her from the intrusive life he lived. He wasn’t ready to bring anyone into the spotlight with him yet.
But he had to get out of the hotel first. He unlocked his car and held the door open for her. Even when trying to beat the paparazzi, he still believed in chivalry. After shoving her inside a bit too roughly, he muttered an apology, closed her door then rushed around to the driver’s side. Throwing the car in reverse, he squealed the tires in a rush to get out of the parking garage. How much time did he have? He didn’t know, but if the paparazzi followed him, he’d have to pull some fancy maneuvers to lose them before driving to his destination.
They made it to the street before he was temporarily blinded by the first flashes. Tamara shrieked when someone knocked on her window, right before another flash of light.
Fuck! I have to get away from this, get her away from this.
Pulling onto the Strip, he expected them to stop, leave him alone. But another photographer jumped onto the hood. Josh closed his eyes so the upcoming flash wouldn’t leave him sightless and slammed on the brakes. The man flew off. He made sure the crazy paparazzo was out of the way before taking off. The last thing he needed was to be sued by some maniac with a camera.
When he’d finally made it off the Strip and onto darker streets, he released the breath he’d held.
“Who the hell are you?”
Her words were mixed with fear and anger. With a glassy stare, she waited for his answer. Would the truth ruin what could have been? If he didn’t tell her, she could Google his name anyway.
“I told you I’m an actor, or at least I was, and a former model. The show I’d been on for two years was recently canceled.”
Her eyes softened. “But why are people following you? Are you really that famous?”
He laughed. “Obviously not if you’ve never heard of me. But when you’re an underwear model, you get obsessive fans, and then I was on Searching For Earth on the sci-fi channel. Don’t you follow the tabloids?”
“No, I have better things to do, but I may have to start watching the sci-fi channel if all the actors are as hot as you.”
All tension from the encounter with the paparazzi diminished when he saw her smile. He reached over and squeezed her thigh. “Maybe you shouldn’t. They’re all known to be players.”
She placed her hand on his, making him want to touch even more of her. “Yourself included?”
He heard the playful tone of her voice, but he wouldn’t make her think he had a big ego. “Maybe at one time, but things changed after the accident. I’m sure you understand.”

Remember, you can download it for FREE starting tomorrow on these sites:
Amazon.com / Amazon.co.uk / Amazon.de / Amazon.es / Amazon.it / Amazon.fr


And if you don't have a Kindle, you can download FREE Kindle Reading Apps for your PC, Smartphone, Tablet and more.

And don't forget to come back tomorrow for the SFR Brigade Midsummer hop where you can win a Kindle or a collection of sci-fi romance stories from over 20 authors, and more. DL Jackson will be posting here on Backward Momentum, and I'll be posting on my own blog: http://jessicasubject.com

Happy Reading!
Jessica
Posted by Jessica E. Subject at 6:00 AM

I downloaded for my laptop, even though I don't have a Kindle. Thanks for the freebie, Jessica.