Laura Garland is visiting today with her newest release, Lighting His Fire. 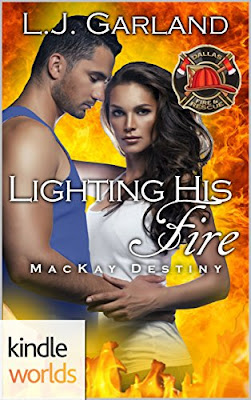 Brigit MacKay fights fires from the air. Flying her helicopter to save lives and land rules her mind and heart. It’s all she’s ever dreamed of doing. But when she spots a body through the smoke haze, her life takes a turn she never expected.

Relationships have left Carter Kohl with a broken heart. Wary of women, he keeps things light. No-strings sex works fine for him. It’s not like he feels any connection anyway. Not until he meets a sexy helicopter pilot who sparks his interest.

Attraction blazes but Carter’s secrets threaten to destroy the tenuous relationship they’ve built. He wrestles with the fact that Brigit has accomplished what he believed impossible—lighting his fire. Can he risk his heart and trust her with the truth?

EXCERPT:
Twenty minutes later, Brigit came to a stop in front of Carter’s cabin and shut off the Jeep’s engine. “Here we are.”
He turned toward her. “Come in with me.”

Through the windshield, she eyed the moonlit cabin. A soft glow illuminated the curtains covering the windows from inside.

He trailed a finger down her arm, leaving a line of hot chills racing across her skin. “I’ll reheat our meal, or put it in the fridge, or make some coffee.”

“Sure.” She opened her door. “Coffee might be good.”

Carter joined her in front of the Jeep. Heat rolled off his tall, muscular frame, enveloping her as he walked with her to the cabin and onto the porch, stopping at the door. Who am I kidding? I don’t want coffee. I want him. Just being near him caused her body to react—her nipples tightened in anticipation of his touch, and her damp panties had rubbed in the most delicious way with each step they’d taken.

Keys appeared in his hand as if by magic, and he unlocked the door. He pushed it open, allowing her to enter first.

She paused just inside where the foyer opened onto the dining area and kitchen. Beyond that lay a nice-sized living room with a vaulted ceiling. And the hallway at the back probably led to a couple of bedrooms and bathrooms.

He strode past her to the kitchen, tucking their food into the refrigerator, then returned to stand in front of her. He moved closer, his broad chest inches from her breasts. His dark-brown stare sent her heart galloping.

“Brigit.” His deep jagged voice spoke of desire and lust and intent. Matching the way he looked at her. The way his body leaned toward hers. The way everything about him concentrated on her.

She shivered. Caught in his intense gaze, she lifted her chin and licked her lips. His focus dipped, following her nervous action, then shifted to her eyes again. “Carter.”

Reaching up, he tucked her hair behind her ear then grazed his knuckles along her jaw. “I’m going to kiss you.” 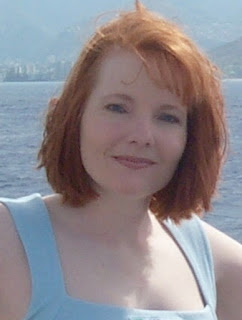 Though born and raised in the south, L.J. Garland has lived on both the east and west coasts. She adores traveling, the latest adventures added to her Bucket List: Machu Pichu and Australia’s Rainforest and Great Barrier Reef.

Married to her best friend for over twenty-five years, she spends her time home schooling three rambunctious boys, editing in the epub industry, and writing stories that she hopes catches her readers’ imaginations as much as the characters and plotlines captivate her. In her spare time (what there is of it LOL), she has a multitude of hobbies, including building archery equipment from scratch and creating stained glass. She has a passion for anything that goes Boom!…from fireworks to high-powered combat rifles…it’s all good. She and her husband are both rated helicopter pilots and spent their 10th anniversary flying cross-country from east to west coast—an adventure she highly recommends.

L.J. loves hearing from her readers! You can contact her at: LJGarland.author@gmail.com

Read all of the MacKay Destiny Stories

Thank you for having me! <3