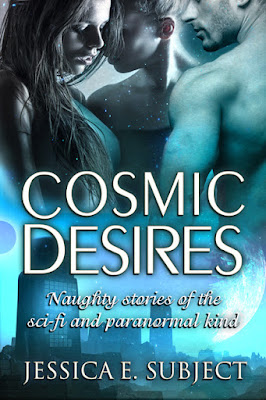 Naughty Stories of the Sci-Fi and Paranormal Kind
by Jessica E. Subject

Blurb:
From closing time at a costume shop to an alien encounter in the woods, COSMIC DESIRES offers ten sexy stories from author Jessica E. Subject. Inside you’ll find a phoenix in trouble, a gargoyle with a mission, a hot billionaire alien, and even a sex club on the other side of the universe. The romantic pairings vary in this collection, all showing just how naughty love can be.

Available in print from:
CreateSpace | Amazon US | Amazon UK

Enjoy an excerpt – PG
Darryl sank into his chair, form-fitted by age. With his foot, he brushed the papers and dishes on the ottoman to the floor. He winced at the crash, but had little motivation to clean it up or do anything. Stretching out his legs, he rested them atop the cleared surface and closed his eyes. Opening them meant he would see her again, dressed in her pressed and polished uniform or with him in bed. But the memories of Beth simply messed with his head. She was gone forever. Nothing he said or did would ever bring her back.
He cringed at the abrupt stabbing pain in his chest. No one said living with a broken heart was easy. He’d known the risks of dating her, but his awareness did nothing to prepare him for the agony of losing her.
Though a military woman marrying a civilian remained a rare occurrence at Beth’s base, they’d celebrated their seventh anniversary four months ago, right before she deployed for the last time.
A knock interrupted his memories. Darryl flicked his eyes open and stared at the door. Perspiration beaded his skin. The last time someone had knocked—most rang the doorbell—bad news had followed. Two weeks ago. And he’d holed up inside ever since, only emerging for Beth’s funeral.
He set his feet on the floor before walking on wobbly legs toward the entrance. What dark tidings would he receive?
Palms slick from sweat, he turned the knob. Catching sight of the two people on his stoop, he stepped back with a startled gasp. No way the people standing in front of him existed. He had to be dreaming.
The man in full military dress gave him a quick nod. “Mr. Malloy?”
He swallowed, his throat suddenly dry. “Yes.”
“I have a delivery for you.” The man touched the woman’s back, ushering her forward. “She’s all yours. Take care of her.”
She? His? But.... Beth had died. He’d watched her body lowered into the ground, received the country’s flag. No way could his wife be standing there. “There must be some mistake. Beth died.”
Strolling down the walkway, the man paused and glanced back at him. “That’s not Sergeant Malloy. It’s her clone.”
Hardly an it. Rather a copy of his wife. Darryl griped the doorjamb. His mind spun. Human cloning had just become public knowledge. And those created remained the property of the military. “Shouldn’t she be in a lab somewhere? Or training for a mission?”
The man, at his parked Humvee, shook his head. “We had special instructions to bring her here should anything happen to the sergeant.”

Enjoy an excerpt – Adult
Hunger pierced Rower’s body like a thousand tiny needles digging into his skin. Food wouldn’t fulfill his need. Only sex, the lust-filled cries and fragrant scent of a woman or two in the throes of ecstasy. And he had a club filled with females from all over the universe to choose from.
Staring at Kaye and the Terran female on the dance floor, he wished at least one of them would have agreed to his offer. But, no such luck. Probably for the best anyway with Kaye’s fragile body and her new lover’s timidness. At least he assumed they were lovers, the way they stared into each other’s eyes as they ground against each other. One or both would likely freak out as soon as he started to feed, unaware of his incubus ways. The last woman he’d been with had passed out, turned into a temporary stiff right after what she claimed was “the most intense orgasm of her life”.
A giggle came from behind him. Rower spun around to see Mizzie and Cynan huddled together and tapping away at Mizzie’s wrist com unit. Beautiful women, yet untouchable with their air of confidence that seemed to keep others away, and their solid relationship. Though, he’d heard rumors they occasionally invited another person to join them in their sexual play. If only he could be so lucky.
A minute later, Kaye bustled toward them, her transparent exoskeleton turned a cloudy grey color, the Terran hot on her heels.
“I have to leave.” Kaye ran her hands across her suit, snapping the pieces together for a tight seal. “There’s a rain warning. If I don’t go now, I’ll be stuck here for the night. Victoria’s coming with me.”
Rain? Not a chance. His reptilian skin granted him the ability to sense the presence of water, predict the wet weather he avoided as well. While precipitation did lay ahead in the future forecast, it wasn’t coming tonight. Had Kaye’s sensors malfunctioned? “Um, are you—”
Cynan shoved him back. “Okay.” She glanced past her petite friend and winked at Mizzie. “Have fun. Don’t do anything I wouldn’t do.”
Sneaky ladies. They must have set their friend up, tapped into the program that controlled her sensors. When Kaye was out of earshot, he wrapped his arms over Mizzie and Cynan’s shoulders. “What naughty friends you are, making your roommate rush out of here like that. I think you both deserve a spanking.”
Cynan cupped the cloth covering his groin area, giving his balls and cock a light squeeze. “Sounds like fun. What do you think, Miz?”
The breathing apparatus on the back of the liggle’s head opened and closed. A wry smile spread across her pale lips. “I’m game. It’s been a while since we included someone of the male persuasion.”
So the rumors were true. His cock hardened and he yearned to set it free from behind his loin cloth, feel the soft touch of the two women with him, slide it in and out of their slick pussies. If they truly meant what they said.
Rower ignored his fear of rejection and led them forward. “To the dungeon then.” The less time they had to travel for a private spot, the less likely the women were to back out.
Standing before the large set of double doors at the back of the club, he stared into the retina scanner then waited for the locks to disengage. After the click, Rower opened the door on the right and allowed his lady friends to enter first.
The musky scent of sex and the moans of many engaged in the act invaded his senses. He wiped salivation from the corner of his mouth, ignoring the tingle under his skin. Swallowing his hunger, he led Cynan and Mizzie down the dimly lit hallway, neither of them pausing to gape at the scenes they passed. Many rooms were already occupied, all open to curious onlookers. In one, he spotted his friend Clarsjon, a large insectoid, fucking a female grey as if his phallus functioned like a humanoid. The woman’s aura radiated throughout the space, appealing to his appetite, drawing him in to feast.
Soft fingers tugged on his hand, dragging his attention back to the women he’d invited inside the private establishment.
“So, are you going to follow through on your threat?” Mizzie leaned in close, brushing her breasts across the back of his arm. “Or should we go ahead and play without you?”

About the Author
Jessica E. Subject is the author of science fiction romance, mostly alien romances, ranging from sweet to super hot. Sometimes she dabbles in paranormal and contemporary as well, bringing to life a wide variety of characters. In her stories, you could not only meet a sexy alien or two, but also clones and androids. You may be transported to a dystopian world where rebels are fighting to live and love, or to another planet for a romantic rendezvous.
When Jessica is not reading, writing, or doing dreaded housework, she likes to get out and walk with her giant, hairy dog her family adopted from the local animal shelter.
Jessica lives in Ontario, Canada with her husband and two energetic children. And she loves to hear from her readers. You can find her at jessicasubject.com and on twitter @jsubject.
Website/Blog | Newsletter | Twitter | Facebook
Pinterest | Goodreads | Amazon | Authorgraph

Thank you so much for featuring Cosmic Desires! :)