Beyond Fairytales version of The Dryad by Vicki Ballante 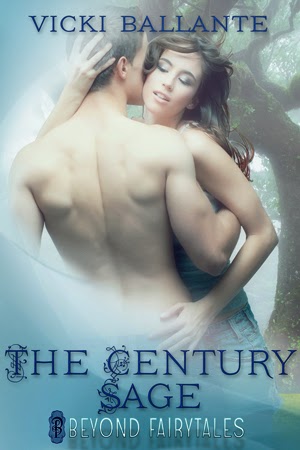 I’m very excited to present my first Beyond Fairytales' release, The Century Sage, based on The Dryad. Writing for the line has been a true adventure, and I’m so excited to have my book out.

The Dryad is a fascinating Andersen fairytale. Here’s what inspired my story and a brief summary of The Dryad story:

The Dryad is a tree spirit and she lives inside a tree in France in the countryside. Paris is becoming a popular destination, and she hears all the wonderful stories about the city by people and creatures nearby where she’s rooted. She wishes to go to Paris for years. Eventually, her wish comes true and she’s replanted in Paris but it’s not as exciting as she’d hoped because she’s only in one spot and doesn’t get to see all the wonderful sights and sounds. She wishes to be human to see those sights. She cries out for a short life as a free spirit to see the world. It’s granted to her. She goes to the city, the catacombs, under the sea, a beautiful garden, but she’s never satisfied – she’s always looking for something, ever restless. Eventually, she dies outside a church having never found her heart’s desire because she didn’t flourish where she’d been planted.

It’s rather a tragic little tale, but I suppose it has a valid message to us – the proverbial grass isn’t always greener on the other side. Anyway, Lina in my story has been trapped in one place her whole life because of her calling as a dryad or tree sage. When she goes to Paris, she finds herself trapped there for other reasons.

Lina is a tree sage, a gifted person who heals trees, but her duty binds her to one place for her whole life until she marries. Tree sages must marry and birth a daughter by twenty-eight, even if true love is out of the picture. When hot rally winner Brad meets her, he is drawn to her mystical powers. Lina can’t resist the man who represents something she shouldn’t go for, but neither can she turn away his sexy touch. Brad offers to marry her and take her on a world-wide rally tour. She can fulfill her dream of traveling, and he provides a way to meet the demands of her breed, but will that be enough? What about love?

When Lina settles in Paris, loneliness and unfulfilled expectations threaten to pull the shaky relationship apart. Could the barriers between them be caused by an evil greater than they imagined? Soon, they will have to fight for Paris, but will they survive?

She led the way through the darkened nursery to her front door. The fresh breeze from the trees calmed her, and she couldn’t resist stopping by the dwarf coral trees with their scarlet trumpet flowers gathered onto tapered spikes.
“These are one of the most popular choices for gardens.” She sniffed a flower and caressed a silky leaf. “They’re hardy and grow fast, but don’t take up too much space.” Her nerves were making her babble.
Surprise shook her when his hand caressed the nape of her neck, his touch cool yet sending searing heat through her.
“You’re so gentle with them. Kiss me, Lina.”
She turned to find him inches from her. His breath smelled sweet like the rose or lavender bush, warm and fresh at the same time. She moved closer to kiss him, and as their lips met, shivers ran through her. Closing her eyes, she took in the full sensation of him surrounding her with solid arms. Joy and hunger for more mingled inside her.
If only she could have him.
“Let’s go inside,” he murmured, his voice husky. “I want to see you. The dim light coming from your front door doesn’t illuminate your beauty.”
For a first kiss, it was a little disappointing. Too quick, not enough savoring, little exploration.
“Don’t you want to look around?”
“Do you have a brochure I can look at?”
The trees nattered amongst themselves. Several of them seemed surprised she’d brought a man home. Smiling, she unlocked her front door, snapped on the lights, and directed Brad to her living room.
Immediately, her indoor ferns shimmered, and their leaves plumped up. Brad gaped at them.
No one had ever noticed the big part of her life—the way plants responded to her presence—before. Not even Henk had picked up on it.
“I feel it, too,” he whispered near her ear, sending spasms through her core.
“Feel what?” Her body moved toward unmistakable arousal. The disappointment from the hurried kiss faded in the brightness of his male aura. Could she resist?
“This power, this energy when you come into a room. The trees and plants pick it up. What sort of talent do you have?”
“I’m just like anyone else.” A lie, but she’d wished for normality her whole life.
“Oh, no you’re not. That’s what drives me crazy about you.” He ran sizzling hot fingers down her neck to the dip where her collar bones met. “Every time I see you, I get goose bumps on my arms. Tingles run up and down my legs. I struggle to breathe. It’s more than sexual attraction. I’m drawn to you, to your essence. I don’t think I could ever enjoy life without you.”

Thank you for hosting me, Dawn!