Science Fiction and Cowboys--A unique twist on a Grimm's classic. 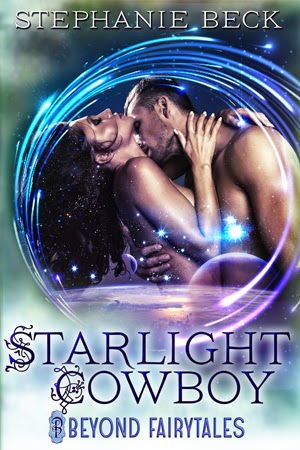 Starlight Cowboy
By Stephanie Beck
From the storybook of the stars.
A groundbreaking mission to the moons of Jupiter should have been Annalina's big ticket for advancement, but instead of captaining her own ship, she's second fiddle to Shields Albright.

Playboy, adventurer, immature.
Shields has been called it all, but really, he just wants to fly and hasn’t spent a lot of time on his social skills. Mutual attraction grows as the walls of the space ship close in, and they come to an arrangement that satisfies them both, while allowing them professional distance. The distance doesn’t last, not as they grow to understand themselves…and each other as someone who just fits.

Not all is as it should be among the stars.
Their ship is attacked, and the moons of Jupiter are not exactly untouched when they finally arrive. The little world they’ve built high above terra firma is about to smack down in the middle of a dangerous, maybe even deadly, reality. If Shields didn't attract trouble like fireflies on a bug zapper, the two might have an actual shot at true love.

Sneak Peek:
Shields strode from the room, his gear already packed and waiting in the briefing room. He hadn’t settled into the base. Knowing he’d be flying soon, there hadn’t been much to unpack. In the small briefing area, the rest of the crews waited in full uniform. Annalina sat in the corner, isolated and flipping through a magazine. Anderson, the tiny boned, frail looking dick sat between the two other woman who would go on the missions—one older and one painfully young. One other man, much older and with chemist experience rounded the group.
Shields took the open seat next to Annalina. “Hey, Captain. How are you? Massage go all right? I was thinking of scheduling one.”
She didn’t glance away from her magazine. “You should. They’re wonderful, and Missy is a pro—who books out six month in advance.”
He leaned closer, loving her tough-nut exterior. “Well, damn. Maybe you could give me the lay version. You look like a woman who knows what to do with hot oil, candles, and sheets.”
“If you mean I look like I know how to cover a man in oil, set him on fire, and use a sheet to dispose of the body—you’re right.” She set down her magazine, but he didn’t miss the smirk on her face. “How’d it go in there?”
“How it always goes. I told them who I wanted to work with; they told me they’d put me with whoever the hell they want, and then I left. I’m heading to ship.”
“You got assigned a ship?” She sat straighter. “So you’re going to captain a ship.”
“Makes sense, doesn’t it? I’ve done these long stretches before, and everyone else in here,” he motioned to the rest of the room, not caring who listened, “has limited experience. I’ve been there before, too. So that helped. I’m guessing Aaron and maybe you will get a plane.”
“Really?” Her eyes lit up then cooled to disinterest. She was a smart one. If she didn’t get her own plane this time, she would after this adventure.
“Yep. Amy is too young, and Anderson is too much of a dick.”
“Hey,” Anderson protested. “That’s uncalled for.”
Shields winked at Annalina and stood up. “Whatever. I’m outa here. I’ll be on Ship Three. Good luck.”

This sounds like a really good read.
I will be checking this out.